First there is a lot here, really appreciate how much energy and thought went into putting this together! Going to just go ahead and add my thoughts to the discussion based on reading through this post and some of the other related discussions.

At a very high level my feelings can be summarized as follows:

I think the issue of limited resources is the most important and it is called out pretty clearly in the post already:

But I think it’s important to further emphasize that because our treasury is held in Honey, it is incredibly reflexive. Our budget increases dramatically when price is increasing, but it also decreases dramatically as prices fall. 1Hive is inherently long Honey by design.

As a result when we think about budgeting expenses, we don’t just need to think about the dollar value of the Honey in reserve, but also the liquidity of the market, and the likely impact of marginal increases or decreases in outflows relative to inflows.

The sense I get is that if we feel that the level of compensation in swarms needs to increase in order to attract and retain the type of talent we need to have contributing in order to succeed, we may also need to focus our resources more narrowly, at least in the short term, to keep our outflows in line with what the market for Honey can reasonably support.

I don’t want to derail this too much by getting into what/where we should narrow our focus on, but I think that’s something that deserves a fair bit of reflection, discussion, and certainly its own thread.

As far as the compensation structure as an experiment for the tulip swarm, a few elements stood out to me:

Hello (´ ∀ ` *). thank you @ceresbzns for taking the time and posting this.

I was trying to push for higher and better payments inside 1hive in general, 6 months ago.
Even got to point to almost fighting for it. which was the main reason I stopped being that active. Maybe its me I dont understand how DAOs works or how to values things.

I think the better question is to ask our self, do we wants to be competitive with space and stay in the top of crypto. IF the answer is yes. Then these rates we have right now don’t stand or make sense. so 1hive DAO has to make it clear what it wants to be.

I agree that long-term Gardens can be improved and this is a really worthwhile thing for Tulip Swarm to develop. Especially incorporating the Superfluid stream control.

If it wasn’t for the Superfluid “minion” on DAOHaus - I would agree with you that Gardens should be utilized (as this is a 1Hive project!).

But having said that - Superfluid streams are critical to this compensation stack design. It doesn’t actually make sense to design it like this without Superfluid. I also don’t believe there are any other design configurations that are this good. I don’t think the quality of the DAO should be sacrificed for this purpose. It can always become a Garden when Gardens have Superfluid.

In retrospect I had lost track of what makes our community valuable. I apologize for pushing for higher pay.
Thank you.

I’m friends with a guy who can find jobs for people all day long at $150k a year for some good React skills and $250K a year for Solidity. Countless people cut their teeth in the DAO space then move on once they have some chops.
It doesn’t take much to start getting offers.
It’s a dev’s market.
We don’t all get initial distributions, and without that stash of coins it can be hard justifying staying in the space. I know we were about to lose quite a few people before the Agave distribution.

Said with love, but I said it.

Edited to add:
If we are limiting the budget to Tulip swarm than I would propose we pivot to emphasizing maintaining what we do have and eliminating the bugs as much as possible.
I’m not sure investing in Farms is the best allocation of resources when people are still running into issues not being able to swap or pool Honey on Honeyswap or sometimes even send Honey.

Maybe a hard pullback and a full deep dive into optimizing the Arbitrum launch would be the look.

I like the thought of a UBI for all bees that meet a minimum contribution standard (a relaxed standard - like a couple posts per week). This eliminates the need for complex pollen admin. Then we use some nice big bonuses for the active bees who make this place run. We all know who they are I think. The bonus program will be complex by necessity and will face all the challenges currently being experienced, but the UBI tells all bees they are valuable, wanted, and loved.

The numbers posted for hourly/wages seemed high until I read the entire thread. Now they seem pretty fair. Pay a fair rate to Europeans and if the Zimbabwe folks get overpaid so be it. They probably deserve a bonus. If we try to adjust pay geographically based on IP we will be stymied by people VPNs which mask IP addresses so I don’t see that idea working.

I haven’t gotten a single distribution from 1hive or Agave (correction a little pComb), struggled to find a way to earn some (non-dev) compensation in 1hive, and eventually took some work elsewhere. I can’t rely on stringing occasional bounties together.

You get Pollen.
No-one gets a distribution other than that.
Agave was a one off.
I’m sorry you’re struggling, and I agree there should be better compensation.

If it wasn’t for the Superfluid “minion” on DAOHaus - I would agree with you that Gardens should be utilized (as this is a 1Hive project!).

minion is Molochs Agent. there is nothing you can do with a Moloch dao that you cannot do with gardens. Agave is governing its entire protocol with gardens. SuperFluid, just like ANY other smartcontract is compatible with gardens

In an effort to provide broad context for DAO compensation, I’ve pulled together some information from a collection of DAOs ranging in market cap from $5m to $3b. Its a work in progress; I will add additional smaller cap/public goods oriented DAOs - if anyone has suggestions please drop links in response and I’ll check 'em out

The current list should help us better understand incentive structures (not $ figures alone) that leading DAOs are experimenting with, and which might best fit the needs of 1Hive.

This research was funded by Tulip swarm 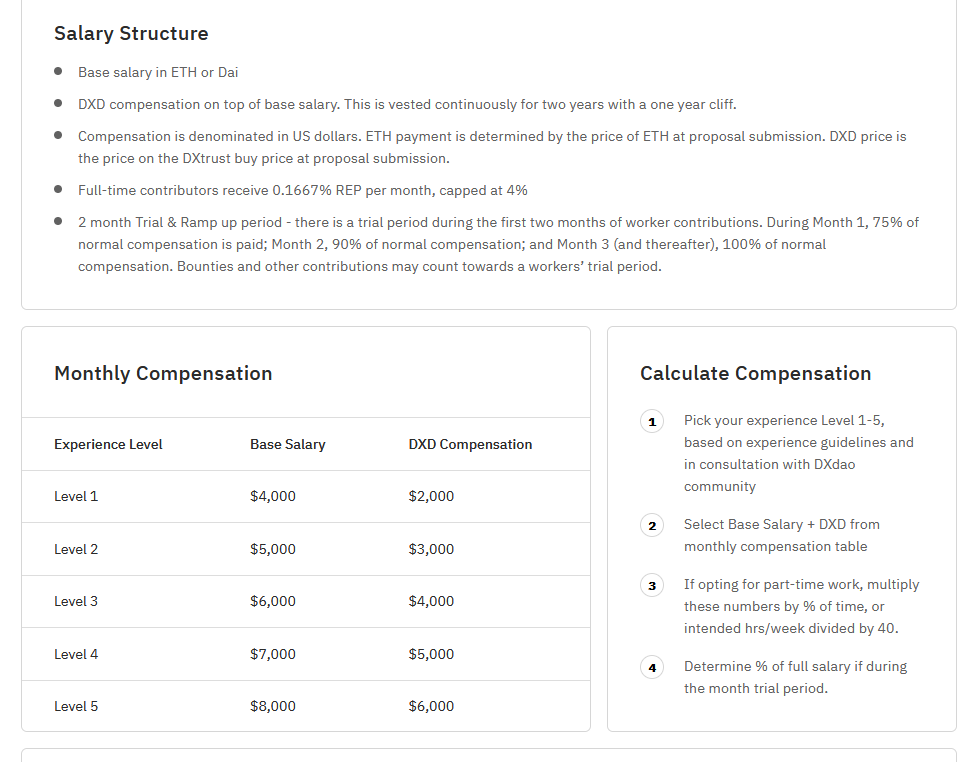 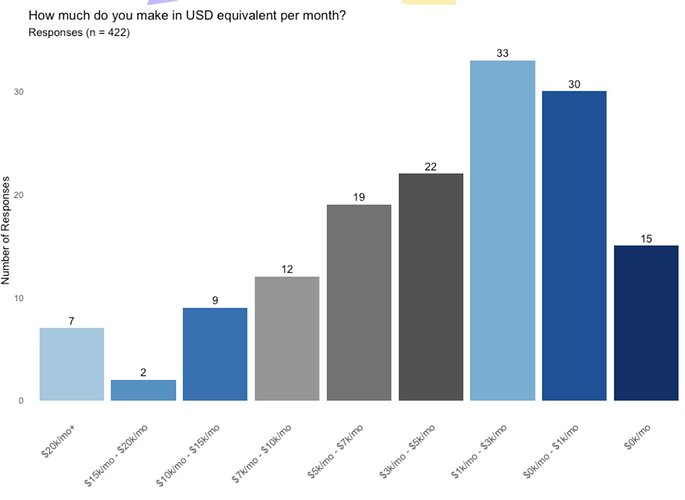 For the respondents to the DAO creator survey: 1. CoordinAPE + "project based" were the most popular token allocation mechanism. 2. DAOs were not the primary source of income. 3. a majority of participants make $0k-$3k/mo. Full survey coming Weds of this week.
5 Likes
Kyle_Stargarden September 28, 2021, 8:20am #32

So what’s the Garden’s interface equivalent of a DAOHaus minion? Is there a minion for interfacing between Gardens and SuperFluid? Is there a UI for allowing gardens to disburse payments via SuperFluid?

@Kyle_Stargarden, the best place to get these questions answered would be the Gardens swarm.
Tulip, unfortunately, got pretty siloed, and there hasn’t been much communication between swarms.