Request for resources to support the creation of 1Hive Book

There is a right way and a wrong way to promote a project. Most spammy projects, many fashionably adding “DAO” to their public-facing name, will use Twitter, press releases, or short-form articles that can be copied and repeated en masse. The implicit idea is minimal effort for a maximum return and roping in as many people in as possible in the hopes of claiming relevance in a credible way, resonating with at least a few uninformed airdrop recipients or readers, is a pervasive practice, but short-sighted.

The real low-lying fruit is long-form content that commands eyes and builds a project’s reputation with the thoughtfulness of the insights. A similar analogy may be that you might spend 2 minutes on a Twitter post that earns 3 likes, but if you spend 5 minutes on a Twitter post that is a compelling meme, you’re more likely to earn 10+ likes so, utilizing game theory, it’s better to focus your time on the more involved post than rapid fire short-form posts.

Increase the awareness and appreciation of 1Hive has an early, transformative DAO that has demonstrated traction at organizing Swam working groups, churned out impressive projects that have scaled, demonstrated how to use collaborative tools that allow team members to work together seamlessly across the globe, and resulted in an impressive TVL for a small group of committed blockchain enthusiasts and devs with a book representative of the high quality of its chosen subject: 1Hive.

Revenue generation from the book is possible but is, by no means, the primary goal of a proposal like this. If the narrative of 1Hive captures the imagination of the public and the sales soar, that’s bonus fuel for promotional efforts to trumpet 1Hive as an early, and historically significant DAO, increasing the followership to the Twitter, @twells exceptional YouTube videos, and engagement here on the message board. @twells has been a source of inspiration with his dedication to 1Hive TV and skillfully rallying people behind high-quality content that reflects well on the 1Hive community. It’s been a pleasure working for him on doing the transcripts for several videos last year, a step that many YouTubers neglect, but is sorely needed when technical topics are discussed to not leave closed captioning up to a clueless AI spitting out hilarious spellings interpretations of words suppose to be Gnosis or xDAI.

This also has a positive tokenomics effect driven by increased Honeyswap transaction volume and identification that 1Hive, HNY, or partnering projects are productive blockchain assets with real revenue backing meaningful and important ideas. In Web3, many are saying that “community is capital,” but if you can combine community and capture profits from platforms that users are excited to use, in the way that 1Hive has, then you have a one-two punch that can bode well for this blockchain project relative to others in the minute-by-minute shuffle of token value.

On the stock market, the efficient market theory asserts that all available information about a company is known and baked into the price, including future dividends and profit appreciation. Markets in crypto are far more inefficient and due diligence is impossibly difficult with many engineers taking the leads of prominent blockchain projects and focusing more on the code than creating a community. By having the quality and output of the written content match the vigorous GitHub contributions from devs, you have a balance that allows investors to better understand the value that’s being introduced as well as blockchain engineers who are impressed by the code quality and frequency of GitHub commits, often a bellwether–when authentic–of a project’s commitment to their chosen use case. 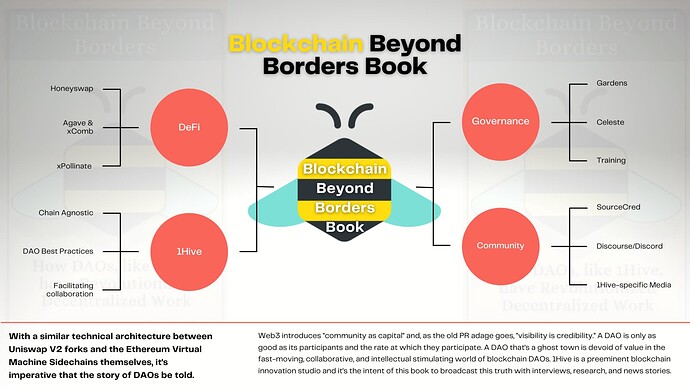 The chapter structure is as follows:

This proposal is inclusive of all stages of the book’s conceptualization, developmental, and promotional cycles. The 1Hive Book team will share downloads and meaningful analytics on the message board monthly as well as providing context to what these numbers mean, how they can be improved, and what the best practices that worked best en route to growth hacking not only the book but the larger 1Hive community’s push to inspire growth. Much of the structure of 1Hive is user-friendly, offering a welcoming environment for those who are interested in blockchain, but perhaps intimidated to join a community for fear that they will lack the tech-savviness necessary to keep up with other members of the community. This community fosters collaboration, community, and cooperation by design and it shows.

Here’s a mock-up of the cover that will be polished-up:

I’ll be adding the Gardens link to vote after a day or two of discussion.

I love the idea of a 1Hive case study/book and want to lend my support to a project like this.
However, given the amount of HNY requested, further details regarding the book itself are warranted. For example, the book delivery date is listed as Feb 1st of this year - does this mean a significant portion has already been written?
The promotional side of things is interesting and can be discussed in its own right; but it seems the first order of business is to get further in the weeds on the book and perhaps see some sample passages?
Happy to give you the floor on the TV stream next Monday to share a bit more if you’d like @altcoins

I absolutely will take the floor on the TV stream on Monday.

The book delivery date is listed as Feb 1st of this year - does this mean a significant portion has already been written?

Yes, should I post it here or perhaps I should present it at the Discord Cafe tomorrow?

There’s a +$60k proposal with 4 potential payees including you.

Looks a little insider from here.

This is definitely a cool idea, but given the recent discussions on the hive, cool is not enough anymore. Here’s some stuff that stood out for me.

These seem to me like better and more fun ways to use the tech we love and use.

So just focus on the expenses of writing and disregard promotional efforts? Definitely amenable to this.

Yes, there’s a large appetite for this on Mirror.xyz and similar crowdfunding platforms. I think this will disrupt the advance that authors rely upon from large publishing houses and has the potential to be lucrative for authors, in shoring up their expenses up front.

I’m a huge fan of the work that Giveth is doing and any way I could wave in with the work that @griffgreen is doing, I would love that. Partnerships in blockchain are critical to the success of projects. Just look at the success of the 3 Polygon guys. Their partnership game is the strongest in the EVM game and their TVL is a reflection fo this hunger for more partnerships with large platforms and they’re not afraid to punch above their weight.

Would love to have you on the call and have you involved as well! I just had long-standing communication histories with these two so I peppered them with questions about how this might work and what would be the best practices with other projects so I approached them first.

The only real determinate was people who are skillful with the pen and have a passion for writing. I love your posts and Discord commentary so if you’re amenable I would love to see the direction you might suggest taking various chapters.

This call-to-action goes for the 1Hive community at large as well.

Thank you for all who attended the Cafe call! It was an engaging discussion that got me thinking of things at all angles.

I’ll be going under the umbrella of @twells’s media projects and following his direction on whatever paths he thinks will be most advantageous for 1Hive as a growth tool.

@solarmkd suggested doing doing 1Hive-specific newsletter or short-form articles which are more easily digestible over Twitter or Discord
@paul brought a compelling perspective that readers may be circumspect about content written with a grant from a community, in the way they are skeptical of tweets that come from a project being potentially shill-y or overly flowery of their presentation of their project.

There was some discussion about 1Hive not being ready for growth due to the lack of resources focused on new users, specifically in the help section on the Discord, and that 1Hive needs to be fixed before looking to gain more users. I was not aware that was a pressing issue but good to know!

Thanks for all that were encouraging me in this effort to contribute to the community. Happy 2022.