My question in this thread is, can we make use of this system at some point in 1Hive? 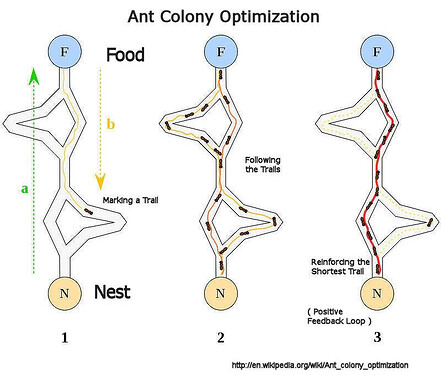 The idea is simple. Ants travel along different paths towards their food source and release pheromones on the way. Other ants and/or the same ant then follow that pheromone trail. The pheromone decay is a time-dependent function, thus the concentration of pheromones is greatest along the shortest path. Most of the ants travel along the most frequently used path.

I have no ideas as of know so please brainstorm below, I just got reminded of this concept a few days ago.

I haven’t got the faintest clue whether this is useful or not, but the fact that this exists in nature is incredibly cool. Thanks for sharing.

Combinations of artificial ants and local search algorithms have become a method of choice for numerous optimization tasks involving some sort of graph, e.g., vehicle routing and internet routing.

One variant of this is the bees algorithm!

In computer science and operations research, the bees algorithm is a population-based search algorithm which was developed by Pham, Ghanbarzadeh et al. in 2005. It mimics the food foraging behaviour of honey bee colonies. In its basic version the algorithm performs a kind of neighbourhood search combined with global search, and can be used for both combinatorial optimization and continuous optimization. The only condition for the application of the bees algorithm is that some measure of distan A ...

I like stretching metaphors till they break, so what would 1Hive be optimizing…

It has graphs. SourceCred is a graph. Honeyswap’s transaction history could be put into a graph. Indeed, companies do this with payment data to do fraud detection, among other analysis. On-chain transactions could be put in a graph. That’s the basis for chainanalysis.

But what would you optimize? The only thing that comes to mind is the arbitrage bots running on Honeyswap. As explained when I asked about micro transactions I was seeing that didn’t make any sense, arbitrage bots will hop through different pools taking advantage of ‘triangular arbitrage’ opportunities. Perhaps like ants, bots could crawl through Honeyswap searching for pools of liquidity? I suspect not…as calculating arbitrage opportunties can probably done via brute force? Presumably the shortest distance to liquidity is easy to calculate deterministically? Anyway, fun to think about.