Proposal description:
Paul and Luke fronted the HNY for the Quest that paid for the entries to the Precedence Library in the 1Hive wiki. This proposal is requesting 36.77 HNY that will be paid out for:

Proposal Rationale
Dispute #7 was the first significant use of Celeste to date. It arbitrated a disagreement in the 1Hive community that rested on really important parts of the Covenant and Conviction Voting parameters, and its outcome has important implications on the future of the DAO.

We used Quests to fund the entries for all disputes to date in the Precedence Library. Paul worked with the claiming Player of the Quest in an effort to make them as useful as possible for people looking back on prior disputes. Through this funding proposal we hope to reimburse the HNY fronted by Paul and Luke and keep the Precedence Library up to date.

More detailed description of how funds will be handled and used:
Funding will go to Paul’s wallet who will send reimbursement to Luke and fund the Quest.

Drafting summaries for Quests disputes does not take much time. You can look at summaries 4, 5 or 6 and have a rough idea. For the latest disputes 9 and 10, a good start at a summary might be something like this:

None of the Keepers drafted for the Dispute submitted a decision, which meant that by default the Dispute outcome was “Abstained from Voting,” which returned the deposits from both the Challenger and the Quest Player. [Copied from summary 6.]

It took me less than 15 minutes to come up with this and share it for free (like my free summary of dispute 7 for the newsletter), yet the bounty sponsors want to pay someone 4 HNY to write such Quests summaries “as concisely as possible.”

When the proposal was created, HNY was at $25, so the effective hourly rate would be $200 for the bounty player assuming each of disputes 8, 9 and 10 (paid 2 HNY each) takes 15 minutes.

The Common Pool was not meant for high compensation when an alternative can create more value for a same price or can make the economy healthier.

To be clear, I’m not challenging Paul’s personal compensation.

I’m adding more comments, which are not arguments for the Celeste case.

Why be frustrated about this challenge even though I did not comment during the ONE-day period before the proposal went on Gardens? It’s a small sum that is not urgent (unless wanted to be sold). It was not an urgent task so funds could simply have been requested without being advanced. It’s not a requirement in the Covenant to comment.

The new Covenant could specify a comment period before creating the proposal and require a challenger to have raised the issue in the forum before the court.

Does the “preventing anyone from taking control“ on Coingecko not mean anything anymore if some key figures can assume they’ll just get reimbursements uncontested within a day? And now just with the multisig that depleted the DAO pool? For your information I was buying many HNY over $500 and I don’t feel spending 2 HNY for 15 min summaries barely anyone is reading is a fair or effective way to put 1Hive in a better direction.

Rather than being a frustrating case, I think it’s positive to have at least one current activity on Celeste, which considers the question of levels of compensation versus the value of work. It is not bad to slash the numerous inactive keepers that are currently making the court less reliable.

Frankly this seems pretty ridiculous to me. I’m not frustrated about the proposal being challenged, the justification for the challenge just seems weak and so the challenge comes across as petty and a waste of everyones attention and time.

Your point seems to be that the task of writing some summaries shouldn’t take very long and the cost isn’t justified… which is a reasonable reason to not support the proposal yourself or to encourage others not to as well… but your objection seems to amount to, “maybe someone should/would/could do this for free, so we shouldn’t be spending on it” – which might be more reasonable if before the proposal or quest was made there was a volunteer who was actively doing this work for free but that wasn’t the case.

Your assumptions about the time it would take and what it should cost leave out any time that would be necessary to find and understand the quest/bounty, research the task, or get feedback. It’s easy to look at a task that you know how to accomplish and estimate the time it would take you to do it yourself, but when paying someone else to do something you need to consider that they may not be as familiar with the task and take more time, they may have overhead related to evaluating/securing the job, and these things are actually quite a bit higher for freelancer/bounties than if you were to employ a dedicated person full time (which is why freelancing rates tend to be more than double what you would typically pay an employee for the same task).

At the end of the day, Its not a huge amount of honey, and it was a good way to dog food quests while getting something useful done at the same time. I thought it was worthwhile enough to personally throw some honey at it to get things moving. Generally, doing work or fronting capital and then asking for reimbursement is risky, since you are putting up work/capital upfront without knowing whether a reimbursement will be approved… which is why we don’t encourage or see reimbursement proposals all that often.

I think its a good thing that people who contribute regularly and have built up a reputation for being reliable and acting in good faith can generally expect some latitude to get things done efficiently. I also think its good that disputes can be raised, but in this case, it just seems like it is a dispute for the sake of having a dispute (and perhaps it is?).

And now just with the multisig that depleted the DAO pool?

This is something that was done in good faith, the details of why it was done will be shared once the issue that compelled me to did is fully resolved. It was basically an attempt to save 1Hive plus related $WATER liquidity partners from a catastrophe, and all the HNY which are now in the multisig will be sent back to the common pool as well.

I don’t think you’re seeing most of the value that is coming from these Quests to populate the Precedence Library, and you’re underestimating the amount of work being done on them. 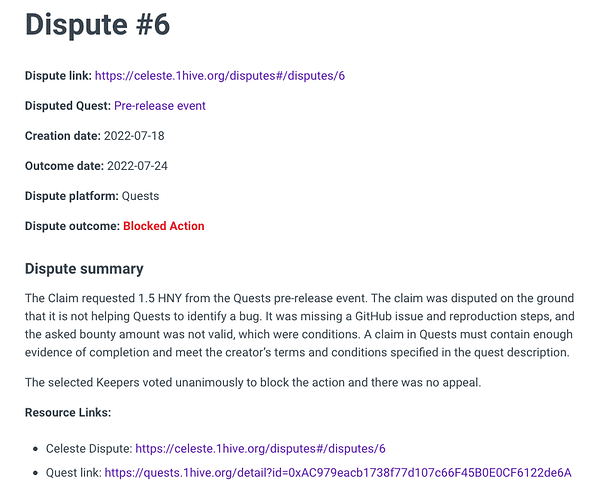 Any value that 1Hive might have in an active Celeste dispute going is erased by the loss in value we have by not having funding available for this valuable Quest, especially since this conversation could be had just as well on this proposal without a Celeste dispute.