As discussed in the thread started in Aligning on 1Hive direction. This new post will address the topic of updating the CV settings to increase proposal difficulty.

Thanks to the TEC community we have an awesome tool that allows us to play around with these parameters. I encourage everyone to give it a try at the Common Dashboard. In our case, we are only interested in the last step of the dashboard where the Conviction Voting is configured.

A few guidelines that many will find useful when thinking about Conviction Voting settings. First, we have two values that we can consider constant for our exercise:

At the time of writing, the common pool has 7642 HNY, and 4407 HNY are supporting proposals.

As a reminder the current parameters we are using in our Conviction Voting are:

Considering all the above inputs I tried a few alternative CV settings that I will share below. Note that I kept the same spending limit as none funding proposal had issues with the current limit.

As an initial source of consensus I propose the following poll:

We can keep iterating the settings from here. And feel free to share your own values and arguments.

I have a hard time thinking about this.
Now we have Celeste to object to any proposals that don’t meet the community standard, and Bees

are always buzzing that proposals take too long to pass.

Why do we want to make it more difficult?

I do see some community support from og’s, so I’m thinking increasing difficulty makes sense.

The Commons Dashboard is pure art.
And math.
Which is art.

can we make any changes that will change the slope of these curves or can we only shift them? for example:

If possible i would support making something like the red line: 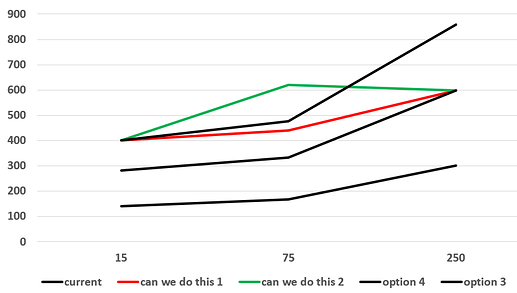 Monstro, would you explain why you think proposals should be harder to pass?
People are generally unhappy that smaller payment and even pollen proposals often take longer than what most Bees

As long as there are 0 proposal reaching Celeste, I guess the proposal difficulty shouldn’t be higher, when the token price will go up we’ll realize that eventually it should be lower.

If the HNY price is falling, that’s probably not related with “spending too much”, but with the lack of usecases for the token, and Celeste/Gardens could be the core of the HNY economic system.

Monstro, would you explain why you think proposals should be harder to pass?

Sure, a few reasons:

I have heard that very small request amounts are too hard but I think from an attack vector this might have to to be at least a base level difficulty but I am open to hearing ideas.

As long as there are 0 proposal reaching Celeste

Celeste isn’t the same as a “no vote” so even though people may not want something it could still pass. So we can’t gauge it this way.

Celeste is only useful if the proposal violates community standards in some way.

I really don’t know how to think about this.
Maybe we should have Proposal Difficulty Params parties.

They could be very useful to help our community get a better understanding of how conviction voting works.

Yes we can do this by increasing minimum conviction (make small proposals harder) and also increasing the spending limit (make big proposals easier).

I wasn’t aware of an issue with 1Hive proposals passing too quickly, just that the minimum conviction feels low given how small the community still is and that we’re trying to focus on funding on fewer, more valuable projects.

Could we do 3 separate polls, with some options for each of the parameters?

Here’s a quick description of the parameters for reference:

But everyone should still read through the links Gabi posted for these if they’re gonna vote on this.

Why do we want to make it more difficult?

To encourage greater consensus and focus for the short to medium term.

can we make any changes that will change the slope of these curves or can we only shift them?

Unfortunately not without further development

I really like the idea of just voting on each of these, hopefully I did it right:

From a “UX research” perspective my case could be probably interesting for the 1Hive community.

I am a product manager with a background in playing professional online poker. I am trying since about 1 year to turn as much as possible to Web3 and to “reinvent organizations”.
I am currently a project manager at dOrg, and I am also working at internal projects there.

I have been trying to get more involved in bringing positive value in the web3 space in various ways, and for a non dev role this is looking kinda difficult to me.

I contacted Aragon several times, I sent a cover letter to many projects, and I am not necessarily looking for paid work, as I still have an income from my past work in the “web2 world” (I work as product manager and consultant for poker ecology, bot detection and creation of poker learning tools).

What I have found, from my personal perspective is that, at least for non technical roles, most pretending to be web3 projects are super centralized, VC centric, they are corporate in the bad sense of the word.

They are using the web3 idea, they are using DAOs as a way to raise money, hire people with a corporate background, and selling some tokens and continuing to work with predatory vertical ways of organizing.

Before joining dOrg I tried to join DX Dao. I ended up having a chat with some girl that had been hired to do HRM, and had basically no idea of the web3 and didn’t like my profile because I didn’t have a nice Linked In page or because I didn’t work in a corporation.

In those small communities of 1Hive, BrightID and GIVeth I have found a different environment. I have met people that has extraordinary talents, a community of believers that are experimenting the future of organizations.

This is the most valuable resource of 1Hive.

Being permissionless, forgiving, being different from the dirty corporations that are ruining the world

In this moment, I have about 50% of my assets invested in 1Hive, BrightID and Giveth, and those are really one of the few communities that I have found to be open, transparent, forgiving, etc.

As more people will realize it, also the token price will change dramatically. To have this happen, maybe the community should become more permissionless, and trust Celeste as a dispute system to filter malicious proposals.

To make an example, I am pretty sure I could bring some value getting more involved with 1Hive, but I am not doing this because I don’t feel it’s the case to make proposals to get HNY, as still very few people does so.

I have a lot of friends that could like to be more involved, and it would be nice for me (even as a token holder) to see many proposals populate the board, even for requesting 0.1 honey.

And that day 0.1 honey will be probably worth some thousand dollars btw

thanks for this informative and easy to understand post @gabi : )
im inclided towards gradual change, which is why i voted for .5% min conviction increase from the status quo. the tables make the relative difficulty very easy to understand imo

what if we take Alternative 4 and reduce the conviction growth to 3 days?

feel like we are all jay powell now. i love it

If the HNY price is falling, that’s probably not related with “spending too much”, but with the lack of usecases for the token, and Celeste/Gardens could be the core of the HNY economic system.

here; perhaps a community discussion specifically about use cases would benefit?

I have a lot of friends that could like to be more involved, and it would be nice for me (even as a token holder) to see many proposals populate the board, even for requesting 0.1 honey.

I don’t think we do want many proposals populating the 1Hive Garden because it creates a coordination overhead. What would be good is if once we have Quests that Swarms create bounties for smaller tasks so less consistent contributions can be made.

I’ve noticed the Giveth Garden requires a huge upfront deposit (seen in the Covenant view drop downs on the right) to create proposals which definitely limits the proposals that go through there, would be worth considering for 1Hive too.

Isn’t the point of conviction voting about allowing a community to distribute value without a central authority ?

The deposit shall be high enough to discourage spam, for the rest there is arbitration. Deposit shouldn’t be a barrier for people to enter.

My opinion is that the tools are great, now the culture has to change: everyday a little more permissionless and more forgiving. The important is being able to filter out the bad actors, but this is a kind of thing that we’ll learn with time.

Distributing HNY as a “massive” online coordination game around the values of decentralization, fairness and forgiveness could be enough to create a demand for the token: this would leads to buy HNY anyone that wants to play the game of finally having a form of money that is distributed in a fair way (while other forms of money are unfair by design, including bitcoin as it replicates the unfair distribution of wealth).

Just like eth needs side chains and L2 to scale I believe 1hive needs sub DAOs to scale. I don’t know that gardens has the bandwidth to manage micro payments like 0.1 as you mention above.

I am hopeful quest and more sub DAOs like tulip, gardens, 1hive tv, buzz, etc will fill these roles

Looks like people are OK with Spending Limit and Conviction Growth but want to see higher Minimum Conviction.

What should the new Minimum Conviction be? (currently 2%)

Should we repeat the poll taking this information into account?