Proposal description:
I would like to request a compensation in honey for everyone who helped securing 1hive after the Honeyswap domain hijack and after the discovery of critical vulnerability that was found in the Hooked Token Manager.

Keeping 1hive, its services and the rest of the gardens safe is a must. We passed proposals to return the funds to the people who lost the funds and to reward the people who reported the token manager bug, but we haven’t rewarded the people who solved the problems from the 1hive side yet.

Honeyswap domain hijack (based on the chat messages, maybe I’m leaving somebody outside unfairly, please tell me so if it’s the case):

We will perform two coordinapes to distribute the funds between the people who helped mitigate the issue.

This is the type of funding proposal that 1Hive Harvest is meant for.

385 HNY would be ~25% of the Harvest pot if all 5 Harvest proposals go through, so it’s not an unreasonable amount this proposal could get, given how important it was. Would you consider holding this off until Harvest for HNY that’s dedicated for Retroactive Funding?

To my understanding, 1Hive Harvest is a method to reward people and groups for their accomplishments, not for paying for their jobs. People have been paid regularly for doing their job well, and when the Harvest comes, based on their impact on the community, they receive an extra reward on top of what they got working.

We have not yet paid our contributors for their hard work on those two occasions. But, putting myself as an example, I do not mind doing pro-bono work for 1hive sometimes, although when I work for an entire week on a problem like the honeyswap domain hijack, I would expect some remuneration in HNY. I didn’t talk with the rest of the people involved in the rescue of honeyswap; I do not know what they think.

Harvest is more than just a bonus! It’s a better way to pay people for work because it happens after the fact when it’s more clear how valuable the work was, and gives the community more signaling power on amounts vs. flat rate binary yes/no proposals, and is streamed which both protects the price of $HNY and aligns everyone on 1Hive’s long term value.

Yes people need to have a more reliable income stream while they work and be able to pay living expenses - which is why we do Basic Income at the Gardens swarm - but ideally those are funded through grants, revenue, or at the very least converted from $HNY to stables with Hedgey

I realize this proposal is unusual since it’s funding work that a) was an emergency, and b) wasn’t handled by a swarm that has a budget, but we do have a small 1Hive stablecoin treasury of ~$15k now that might make sense for this too. As it stands, if 385 HNY were to be market sold for stables on Honeyswap, it would cause a 13% price slippage in the price of $HNY.

I think the best route for 1Hive would be a combination of funding sources - something like:

I’d imagine this actually ends up being a good amount more money for the people in the proposal since the work was super valuable and likely to be rewarded well in Harvest.

if 385 HNY were to be market sold for stables on Honeyswap, it would cause a 13% price slippage in the price of $HNY.

I do not have any intention of selling HNY, and I don’t think lkngtn, gabi or will who are the three other people who may receive more compensation for keeping 1hive secure will sell either.

I think $15k is a very modest amount for all the work that was done in these two cases. I’d like to keep the proposal going on in the Garden, and if people supports it, I’d like to receive the HNY and distribute it using coordinape as it was already planned.

If people didn’t support it, it wouldn’t be a drama either.

OK, if no one is selling the HNY and there won’t be a Retroactive Funding proposal for it then all’s good. It’s easier to trust you guys since you’re seeds - I’m just trying to encourage good DAO habits.

The coordinape distribution for the work done dealing with the honeyswap.org domain hijack is as follows (luigi opted out): 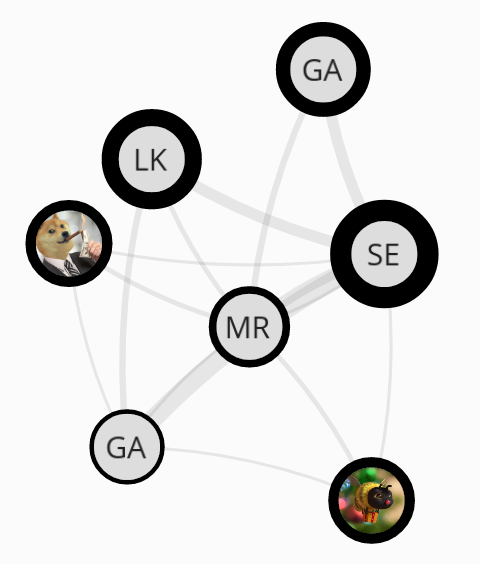 This is the evmscript used to distribute the funds:

And these are the transactions generated:

The other 129 HNY for fixing the Token Manager vulnerability will be distributed separately.

I’m sorry, I didn’t check the sender address properly and the rewards were not sent. Thanks @DogeKing for the heads up!

These are the transactions distributing the rewards: