Create a $100 Giveaway on Twitter in order to bring in new users to Honeyswap.

Proposal Rationale
Yesterday, I did a little experiment. I tweeted something about Honeyswap https://twitter.com/sirhamude2/status/1325154930911547392 and included a small $5 worth of ETH airdrop using cctip (a tipping platform on twitter).
This led to the tweet reaching over 3,5k impressions and over 800 media views ( I included the video on how to use Honeyswap in the tweet ) in one day. 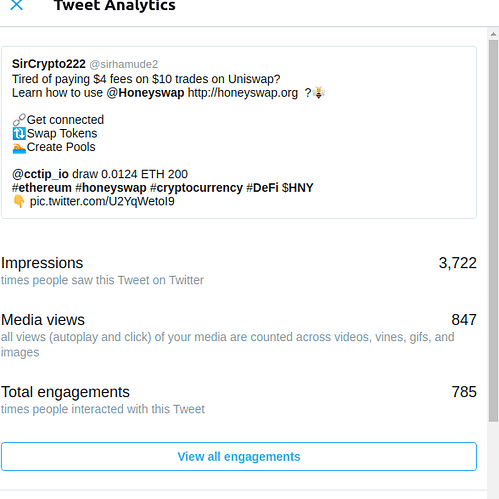 twitter588×588 44.3 KB
I also tagged @Honeyswap’s and I noticed a 20+ followers increase since yesterday but I don’t know if there’s any correlation between the tweet and that.
After seeing this, I came up with an idea that I personally believe will bring tens, maybe hundreds of new users to Honeyswap for a very small price.
The idea, as you may have already guessed, is to do a Twitter giveaway from Honeyswap’s twitter page. If this idea gains any support, I will work together with the #buzz team and hopefully have the giveaway live by Friday, to also ride the publicity wave that we will get from the @Badger airdrop. This is how I plan to do it:

Expected duration or delivery date (if applicable):
Giveaway should be live by Friday 13th and over in 4 weeks.

To be announced after discussing with the #buzz team

Skills and previous experience in related or similar work:
Organised and participated in several Twitter giveaways. Two years ago, even won 1000 Doge from one.

To be announced after discussing with the #buzz team

Ethereum address where funds shall be transferred:
To be announced after discussing with the #buzz team

More detailed description of how funds will be handled and used:
To be announced after discussing with the #buzz team

I think this is a great idea! It wasnt clear to me whether the idea was to tip in ETH only for the initial 25$ as an airdrop? And have the actual 100$ from the giveaway be in HNY/ETH/xDai? Nevertheless I think it would be a nice way to get some more users. I support it

Great idea. It will provide marketing plus the analytics to show its utility immediately.

Amazing work and good job on the research. Count me in for supporting your proposal and anything else needed for this to pop off

Awesome idea, and that’s what I call marketing!. I will be happy to support you for this.

Great idea, I would like to see giveaway in xdai

This is awesome! exactly the kind of stuff we need to be doing.

very good work !! giveaway in xdai will be great

Awesome idea and great research, I will also support this.

Just excellent.
I’m so thrilled to be part of this community.
So many brilliant pro-active people.

I definitely will support a proposal to do this.

I was thinking…could it be possible/advisable to establish the requirement of having done at least 1 transaction at HoneySwap to be able to qualify? We could check it when we ask for the address to give the winner the prize, if he/she has done a transaction before we give the prize, if not, we choose another winner.

I mean, we are giving away a lot of money, so I think they would have to gain it haha this way we would achieve a lot of transactions at our exchange!

I think that if we do this we wouldn’t need them to do the questionnaire, because they learn by practice haha ! What do you guys think?

Like a said to you on discord it’s awesome idea to gain more people and introduce throw this airdrop about 1hive, how everything is working here.Also what I think maybe if we can catch with time and maybe have some like extra question on document where people who followed the AMA stream on youtube can answer and maybe get slightly more chance of winning the airdrop
Let’s see if people really follow what this community is doing.
Also you have one online site where you can create that giveaway its called - gleam.io something like that.

I like the idea! i think we would reach a lot of people with it

It would be nice if we were able to pair this with 3 or 4 other big announcements so this gets them in the door and the other 3 or 4 create additional excitement. Kind of the idea of holding off on major updates until a bull market then release all the updates at 1 time: such as news on token supply, rewards policy, staking for governance, Celeste, sourcecred, in addition to a nft competition or any other competitions. not all are needed but if we were able to provide a short term timeline(obvious caution needed with launch dates). And ideally these 3 or 4 announcements comes with a reduction in supply So this just doesn’t come off as a mass solution of the token it may generate enough to get people onto xdainet… Sorry to derail into tokenomics.

i’m nothing but i support this idea…
leading to more users, the better.

but !:
do we have enough infrastracture?
I mean whatever who does not relate to mainnet or xDai…

i know 1hive from these ways myself! twitter is important
maybe another one come up and help more users to know us