Historically the faucet has been a place that attracted many new bees to come and also allowed for new bees to come back day after day creating a habit which in some cases would attract contributors. Since the faucets original deployment I think it is safe to say there have been over a dozen discussions on the topic and a number of proposals have passed to refill the faucet. However, over time we have found that with anything people will find a way to exploit what was intended for good.

Here are just some of the faucet discussions from the past:

Part of these discussions resulted in the idea of deploying quests for 1hive. As 1hive Quests is still an ongoing project I would propose that in the mean time we run a rabbithole campaign which I believe can provide exposure and similar results the faucet once provided early in its life cycle.

This is not a replacement for faucet as there is an ongoing discussion about a faucet that maybe effective on Arbitrum.

For those that are not familar with Rabbithole here is a snippet from their docs:

At RabbitHole, we believe web3 fundamentally reshapes the future of work and talent organization. By curating an on-chain graph of a user’s prior achievements, RabbitHole is creating the on-chain resume for the future of work. As we move towards these goals, we believe it is important to maintain core values that build up and strengthen the communities that we create and become a part of.

What is needed from 1hive?

This will be a pretty tough forum post since there are so many options. Many will likely have a passion for what we should do and it is likely we will never reach unanomous support but I am hopeful we can get as close to a solution that is supported by 1hive as much as possible.

It is also worth noting that we recognize anything can be gamed and we should consider how we can reduce gamers who can abuse these quests. This brings us to the topic of what sybil resistance solution should we use for these quests. Many may suggest using BrightID as a pre-req for qualifing. As I believe this is a great solution it does create a barier to entry for those unfamilar with xDai network and BrightID. I would actually propose that the sybil resist tool we use is to whitelist any ethereum address that has performed a transaction in the last 30 days. This accomplishes 2 very important goals:

Before we post a proposal we need to identify a few things:

How much HNY should we allocate for this campaign? 20% goes to rabbithole to do the work (eg 100HNY would result in 8HNY rewards, 20HNY to rabbithole)

How many people should we try to target/reach? Consider more people means smaller reward

What sybil resistance tool should we use?

Now most importantly are probably the quest themselves. To get the conversation started we need to identify tasks that can be confirmed on the blockchain. As I understand it, a signing from your wallet is acceptable too (such as a snapshot vote). Here are some examples:

I look forward to hearing what creative on chain solutions we can come up with.

Thanks and shoutout to @Stonky @CurlyBracketEffect with there help on this

I like the Bright ID system as rabbit hole already uses it. Can it be gamed a bit, sure. Nothing perfect yet. Having and Eth address burns alot of newcomers. Eth too expensive for some newcomers so they would be looking for an alternate cheap option.

at 2,000 participants , 55 honey - it’s about .02 hny per participant (minus rabbit fees)
No need to pay for gas. I had to bridge to optimism for a Polygon quest… and there was no mention of that in the quest… so if people want it… they will do it.

Started the rabbit hole stuff but it’s a bit complex …I see only XP being earned …how come hny??..

It will be a quest to earn soon i believe. Right now no rewarded quests

awesome!
…it would be great for RH to provide some simple $/user reach metrics so we can figure out how to think about poll questions 1 & 2 together? What are the avg figures @CurlyBracketEffect?

Here are a couple of case studies 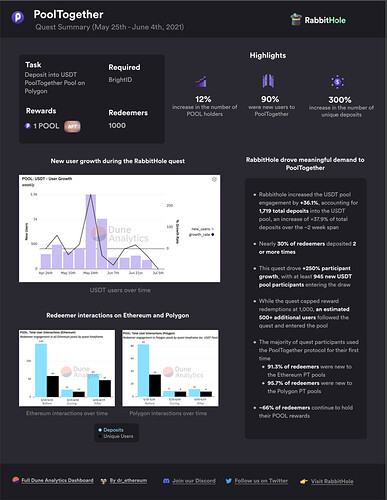 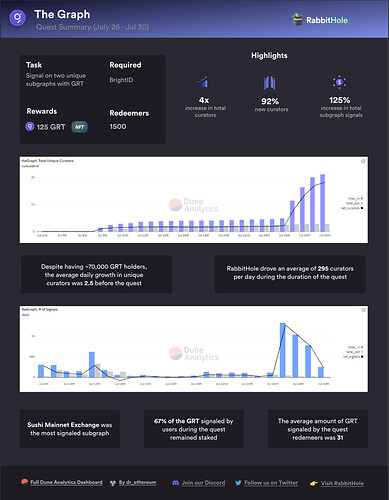 We could reach a lot larger audience partnering. if we do an Agave + 1hive + xDai Quest it could be as follows:

4 task 1 quest. I understand rh can only pay out 1 reward token, is that right ? @CurlyBracketEffect

Technically we can pay out more than one token, but the UI isn’t set up to display more than one reward token. So for all intents and purposes for the time being, yes, we can only pay out 1 reward token. I wonder if it would make sense to distribute an LP token as the reward

Not saying we could do that…just a thought that I’m having now and will bring it up with the team.

sweet! thanks man - thought you must have something like this handy

really dig the idea of folding xDai in on this

Good news is they have and xdai quest currently for DAOhaus. So the people that bridge over will already have some funds on xdai

go here my dude : https://rabbithole.gg/ They have a current quest with a tutorial available

Hi , deliver a nft and cover rates by adding a small plus profit but small still brigh id is not perfect and if the task is in xdai it will last hours.