Hey! So I think this is missing from some of the convos, but Gabi, Sacha, Mitch, Lauren, Sem, and I (and maybe others?) were all chatting about naming for lots of Parameters in Gardens and ended up surfacing that the name “Disputable Voting” Sucks.

We looked at a lot of potential other names… mostly flowers and gardens related things.

Then Gabi (I think) Called it Tao Voting… and everyone loved it.

Tao voting (pronounced with a D) is named after the Chinese philosophy of Taoism, it’s not an acronym.

Taoism is based on the Tao Te Ching which is generally considered the earliest anarchist (or at least libertarian) texts ever to be written. I referenced my favorite chapter here:

So in short, Tao Voting is a great name! 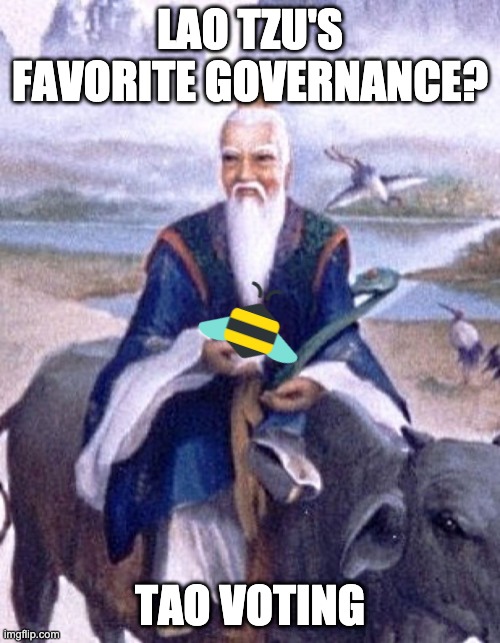 I hadn’t thought of Lao Tsu as a Libertarian before, but I see it.

I’m not really a fan. I think we should be trying to introduce as few new concepts as possible to new users and trying to instil an understanding of Taoism I think is needless cognitive overhead. Also when I first saw it I assumed it was an acronym and was confused when I couldn’t find it’s extended version.

Unfortunately I can’t think of a good name for what decision votes are, but I don’t think TAO votes is clear at all, without looking at documentation, and even then it could be confusing. If instead we call them what it does then in the “decision vote” case, I believe that it’s capable of changing anything related to the Garden/1Hive protocol, therefore something like “protocol vote” would be more suitable. For conviction votes in this case I think “proposals” as it currently is fine as it encapsulates funding and signalling.

Either way I don’t look at the term “TAO vote” and think of the decision votes we’ve been using all this time.

Disputable Voting was a bad name since Conviction Voting is also disputable… so we tried thinking of a good name related to and delegation, wait for quiet… didn’t come… Then we were looking at garden themes… Lilac Voting was the lead option… but it wasn’t feeling great… But then Tao voting came up and it felt like a no brainer.

Tao or Dao (Chinese) is a Chinese word signifying the "way", "path", "route", "road" or sometimes more loosely "doctrine", "principle" or "holistic beliefs". In the context of East Asian philosophy and East Asian religions, Tao is the natural order of the universe whose character one's human intuition must discern in order to realize the potential for individual wisdom. This intuitive knowing of "life" cannot be grasped as a concept; it is known through actual living experience of one's everyd La...

“The Tao can be roughly thought of as the flow of the Universe, or as some essence or pattern behind the natural world that keeps the Universe balanced and ordered.”

Whether we like it or not, good branding is important. Tao Voting is a catchy name and IMO a fitting concept.

The most well known DAO framework is probably Moloch… which maybe should have been called “Exit Voting”… but with the moloch meme, it went far.

Gnosis “Safe” could be “Modular Vault” but it doesn’t give that warm fuzzy feeling of safety.

And now Safesnap is being rebranded with some cool naming (announcement pending).

Taoism is very well known anarchist Philosophy in China and around the world… Google says > 100 million people practice it.

And Tao is pronounced “Dow”… with this branding it is well poised to become the default voting pattern for Aragon DAOs… it is Tao Voting, all DAOs will want to use it!

Also if you didn’t see it, there is a nice twitter campaign explaining all the Tao Voting Params: 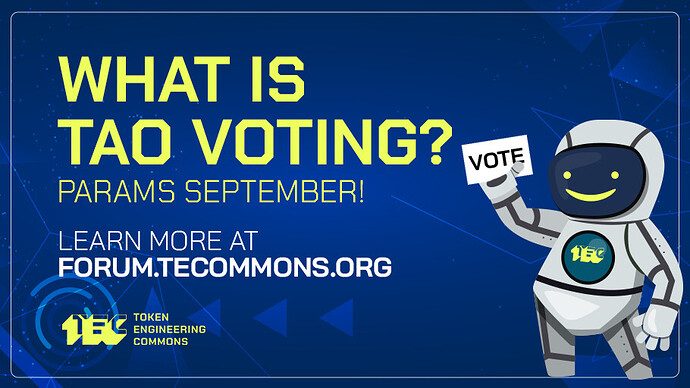 ⚙️After the Commons Upgrade, Tao Voting (formerly Disputable Voting) will be the voting process used to make changes to the governance & economic settings of the DAO. Keep reading over the next few days to know its parameters! 👉Learn more: https://t.co/KnVCxi6fjL #TECparams 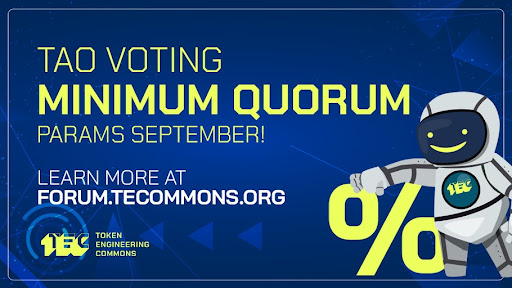 💡 For a proposal to become valid in Tao Voting, a minimum % of the total supply of $TEC must vote on it. This is the MINIMUM QUORUM - a parameter that ensures proposals can’t pass w/out sufficient community participation. 🧐 Learn more: https://t.co/M428vMaQwn #TECparams 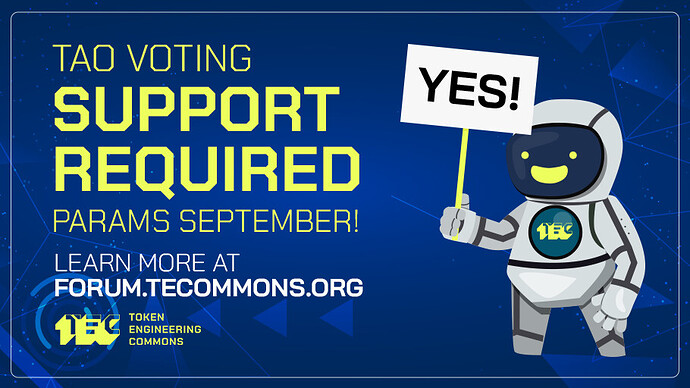 💡 To design Tao Voting, we need to decide what degree of consensus we’ll need to pass proposals. This is determined by the SUPPORT REQUIRED (%) — the percentage of total votes that must vote YES on a proposal for it to pass. 🧐 Learn more https://t.co/szHvK49410… #TECparams 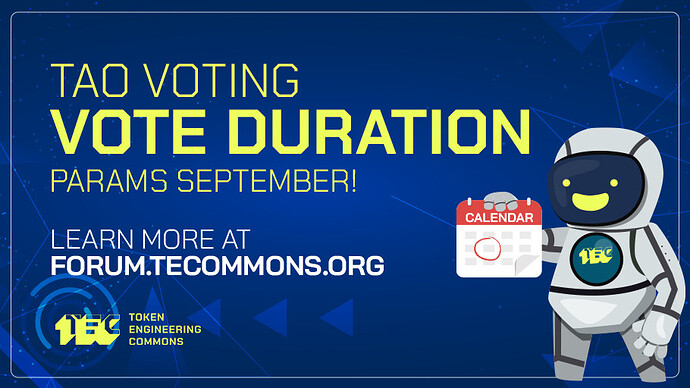 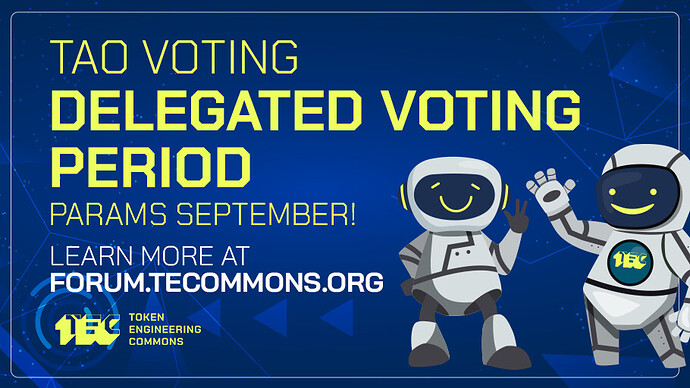 💡$TEC holders can pass their voting powers onto another DAO member, called a “Delegate, who can vote on their behalf during the DELEGATED VOTING PERIOD. This ends before the Vote Duration to let voters verify/veto their delegate’s vote. 🧐 https://t.co/DYTUrJ6JLO #TECparams” 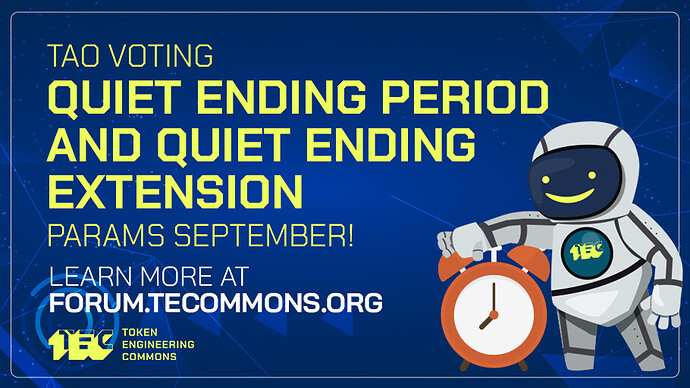 💡If the outcome of a vote changes during the QUIET ENDING PERIOD more time (the QUIET ENDING EXTENSION) is added to the Vote Duration. This allows time for more voter input if a vote is contentious & prevents last-minute flipping of vote 🧐 https://t.co/rDOr5YcCBb #TECparams

I’ll be honest, I was hoping to do a vote or something on the forum for advice process but was advised against it.

So we pushed forward with the naming.

No one’s going to read “TAO Vote” and learn anything about what a decision vote is without reading documentation, that’s poor UX.

At this stage I consider “Decision” better than “TAO vote”, and since these votes are so infrequent and I haven’t heard any better suggestions I’m warming to the term “Protocol Vote” since that accurately encapsulates what it does, it allows changing anything related to the Garden’s on-chain protocol.

People have often come into the 1Hive Discord and been confused by all the meme/random name related rooms, it’s gimmicky and fun but it can be off putting and I don’t think we should be replicating it.

In the Gardens interface we should keep with “Funding proposals” and “Decision proposals” for the sake of clarity and good UX. This is something we are already doing good. No user will see Tao Voting or Conviction Voting in the UI as it’s confusing.

Tao Voting would be the “brand” of the wait-for-quiet voting mechanism, only made at the level of the Aragon app name and documentation. It can be used as a proper name to distinguish from other voting mechanisms, such as Dandelion Voting or Conviction Voting. “Protocol Voting” doesn’t accurately reflect that, since the way 1hive votes changes in the protocol may change in the future, but “tao voting” can be referred as this particular system even if it’s not used anymore. For example Dandelion voting was the previous 1hive protocol voting, but it isn’t anymore, and it is still used as Dandelion Voting by other DAOs such as TEC Hatch DAO.

Having said that, I agree with @willjgriff that those proper names should not appear in the UI. I think that we should keep them for the system specification and documentation.