What Tulip Swarm has been working on:

What Tulip is working on next:

I support the proposal but either we need to set aside a large percentage (50-70%) of this budget for dev work to ensure real development happens and/or ensure we execute on the limit orders and landing page in this funding period or I think I will be hard pressed to renew a 5th round of funding.

Limit orders do not require much resources seeing that Autonomy network will help us set it up, as well as setting up the Connext aggregator. Also as per landing page i think we can get away with just updating the about.1hive page with the proper links rather then doing a full rework.

Re: the landing page…here are a few sketches to consider and if you have any input on site objectives please leave your thoughts here. Hoping to get a meeting together in the coming week to kickstart; anyone who has site mapping and/or design ideas please join! Lettucemeet

It think it would make the perfect starting point for discussion this week; there are a lot of things I like about it.

Apologies on that Twells i did not know it was under construction already, my thougts came in as to how we can reduce resources to get a working product we can showcase. I would loooovee to see a new landing page for 1hive

Nobody’s not paying devs or telling devs to not work.
I’m not sure how setting aside a percentage for dev work will help other than we’ll have to stop everything else until we can get more devs and get them to stick.
A whole lot of what goes into maintaining and expanding on a dex is not actual dev work.

We have a lot of work to get done, especially now that we’ll be deploying on Arbitrum soon.
We also have just onboarded several devs who need to be paid.

I hope this can pass quickly.
It’s unfortunate that so much of our Honey is tied up in pools and staking.

A little help do this passes in a timely manner would be nice.

Tonga and I will be watching out in the future so this gap in pay doesn’t happen again.

I think this proposal only makes sense in the context of how we choose to regroup and refocus as a hive i.e in the context of a more coherent vision/roadmap - I believe Luke is working on a forum post to get the discussion started.

In particular, what we choose to highlight in the landing page will depend on the outcome of this discussion.

Since single sided staking will weaken the relationship between 1hive and honeyswap, i also think the merits of this suggestion should be viewed in the context of that discussion.

There does seem to be kind of a disconnect between Honeyswap and 1Hive at the moment.
In the cafe call last Friday it was mentioned that moving Tulip’s main operations back to 1Hive’s server might improve community involvement.

At that moment I realized how the Discord “housekeeping” at Tulip server, where people who hadn’t contributed recently were removed from the server, must look from the other end.
We don’t count in the pollen collection, and I hadn’t thought through to transparency.

People are of course welcome to rejoin the server, but getting bumped from a server can sting, especially if you don’t know what’s up.
And you stop receiving server notifications.

Maybe it makes sense for biz dev to have a private place to discuss the deals. Since our software is open source it doesn’t make sense to sequester development.

It’s also come up to shift payment toward development. In that case non-dev work should definitely be on the main server where people can at least get nominations and collect pollen.

I came into Tulip looking to get more involved in dev work. @D0SH had found somebody to project manage while @ceresbzns is on parental leave, but that person I think decided they’re not comfortable enough with crypto to take this on, so I stepped in.

In the week plus I’ve been project managing some very important previously under the radar things have happened.

For the record, I want to be very clear about what’s being voted on. The proposal as it is posted is 50HNY for:
1.) Stop loss/limit orders.
2.) Single-sided staking for xCOMB and pCOMB farms
3.) revamping the 1Hive landing page

To be clear, about half of this is back pay, including for new devs who haven’t been paid for weeks.

Also, general Honeyswap maintenance and improvements, including Curve integration, at this point on Polygon.

Once the integration is built it will be useful across ethereum-based chains and Uniswap forks and clones.

We’ve already built some next level dApps, like the Honeycomb wallet. Showing the value of the lp tokens, while we do that here, is a thing.

That should be a different proposal then. We can’t change proposals on people, it’s not ethical to say we are going to do x with the funds and do y no mater how “right it feels”.

I pulled my support for this proposal. I see a few problems:
1.) the HNY is going to a colony account with NO multisig needed, normally I would be okay with this but.
2.) we have at least 1 person that can make payments on colony who has publically said that 2 of these people on the colony have possible intentions of doing something different than what the proposal is saying. It appears to me a few in charge of this fund have little to no intentions of supporting the work outlined in this proposal.

I do not know if this is true but we currently have a colony account with no multisig and suspicion to doing something different from the proposal outlined.

What is needed - the funds need to go to a multisig with more clarity from the signers around their documented intentions of how the honey will be used.

If multisigners have different intentions from this proposal then a new proposal is needed, we can not change the proposal on supporter last minute potentially without supporters knowing what they thought they were supporting. 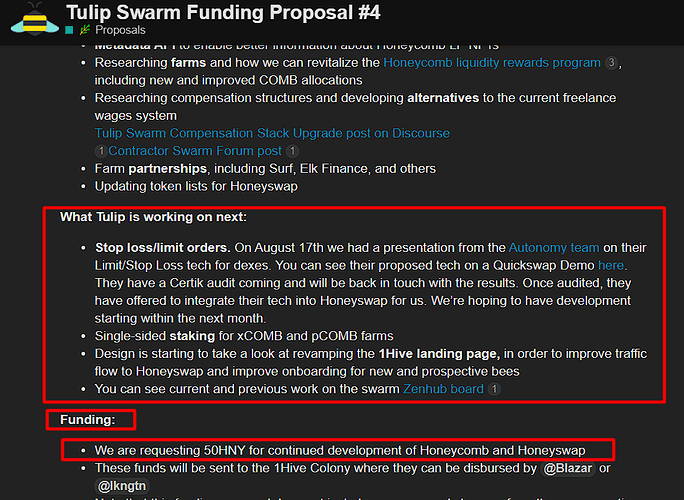 @Monstrosity I didn’t list anything that wasn’t in the proposal or on the Zenhub.
In fact, Curve integration is the first thing listed in the proposal.

we have at least 1 person that can make payments on colony who has publically said that 2 of these people on the colony have possible intentions of doing something different than what the proposal is saying. It appears to me a few in charge of this fund have little to no intentions of supporting the work outlined in this proposal.

I seriously doubt any of the signers on the Colony are planning to do anything untoward.
We have the Gnosis set up and ready to go. I don’t think you were at the meeting when it was decided to add Colony signers and not use the Gnosis. Would have been nice to have some counter-points.
I’m not sure which two signers you mean, but if I’m one of them and removing me will make a difference to you I’m fine with that.

If there is no intentions on completing the 3 tasks with the 50HNY then this proposal is misleading.

I propose if we want to backpay + complete these 3 tasks we: Tally up line item back pay cost and request that exact amount. Then either in the same proposal or separately request the amount we think is needed to complete the 3 tasks outlined.

Tulips job is to get a handle on their budget to execute the tasks outlined in budget.

As a side note: If tulip can’t get the job done with the budget they request then the swarm is ineffective and hence my statement above about Tulip needing to get a handle on executing these tasks by focusing their budget more on dev work so they maybe within budget if they want continued support. I mostly approve any and all work from Tulip but I would not continue to support a swarm that is unable to meet the few expectations outlined, more specifically ‘completing the tasks they say they are going to do within budget.’

The proposal has a long list of tasks that are being worked on, not just the three you mention.
We decided not to write another proposal last Tuesday, in the context of the proposal was about to pass. Now you’ve withdrawn major support, implied that at least two unnamed people are dishonest and intend to steal or misuse DAO funds, and the proposal won’t pass for another couple of weeks.

What I was saying, repeatedly, and gotten nothing but pushback from inside bizdev at Tulip,
is that the community needs to be involved in the direction Tulip swarm is taking.
The input I have received from the community is “Farms aren’t working. Why is Tulip all about Farms?”

I’ve asked ceres to withdraw his proposal and I will write a proposal to get at least the back pay out.

I posted a recording of the last meeting where you can clearly hear people who are unhappy with how Tulip is going and want the community consulted.

Have you listened to it?

Per @metaverde’s request, I have withdrawn this proposal from the Honeypot