Most Treasuries have a marketing budget, but the question of how to most effectively use those funds to achieve the goal that you are looking to achieve is not something that people are in agreement on – because a lot of brand based work is immaterial.

There are a few different common conceptions that people have about marketing:

In a parallel line – Artists and Creators have a similar issue concerning the creation of their Art as “Freelancers” or, as piece-meal trend seekers.

It’s possible to find success in the above ways - but It’s possible that the marketing hype booms are short lived, and the charts fade down instead of grow up over time.

It’s also possible to chase trends as a creator, or live hand to - mouth via poorly negotiated freelance contracts

The trendline is a vulnerability to short time horizon projects.

When a project has a short term time horizon, the rewards and impact are less significant.

These are standard fare right now, and will not last in terms of their effectiveness. 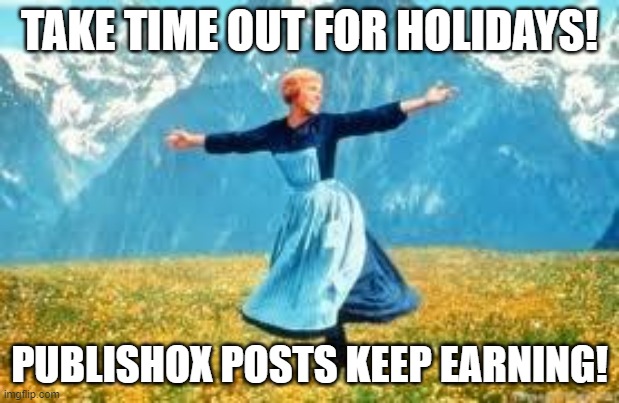 TLDR - Publish0x offers 200$ in their token, or via campaign contributions in $FARM or $SNOW or $AMPL, and the twitter hashtag gets flooded with these low quality memes.

A couple of high end artists take the cake, and the rest of the work is basically empty calorie attention filler.

Let’s break this down a little bit:

1) How long do you look at these memes?

2) What does it say about Publish0x?

You can make posts and earn and you will be happy.

3) Does it demonstrate in any meaningful way the power of using Publish0x?

Not really, it comes off as a low effort contest submission, and filler meme for the #publish0xwintermeme hashtag.

4) Who are the audiences that are being reached in these contests?

Friends of Friends, or Mutuals or Followers. – Not especially connected toward anything in particular, or centered around any sort of function or group.

– but it’s okay, cause their mediocrity is reflected elsewhere throughout the larger space.

This is a Ghost In the Shell 3 Minute Short funded to advertise the Microsoft Surface Pro.

Not only is MIcrosoft paying for the Advertisement in Project Format [a 3 minute custom animated meme, likely executed by a small studio – targeting tech savvy users for their Surface Pro [~2013] –

What they are paying for in its entireity, is the building of the social asset, and the brand construction of the GITS brand.

This means that GITS owns a trusted relationship with their Audience, – A Social Asset, that they have built over time, across the development of many projects.

This is what Microsoft is paying for when they hire the GITS studio to do a Surface Pro Advert, and their hope is that this targeted audience and unique method of capturing attention translate to more surface pro sales – Presumably, so if you wanted also wanted to assassinate faceless mech oppressors, or white hat hack t3h 3vil c0rp0r8ns, you could use their tools to do so.

Their gamble was that the venn diagram of GITS Audience Psychographics and Surface Pro Tablet Consumers shared enough of a common space to provide a return on their ad spend.

[Scaled Down Application of Concept]

Returning to the Publish0x Meme contest, Let’s make some conceptual modifications given this information:

Ten Different Quality Long Form Meme Projects, with 10 Different Audiences being cultivated and in relationship with those Meme Creators are worth more than 1 Centralized Audience with the same amount of people – because the aggregated audiences come with compartmentalized managers.

If you’re going to build an audience for your creative project, then you can find different ways to monetize your project. This gives each individual creator the incentive to build their own business – which is what they ought to be doing anyways – the marketing focus simply provides them with a context and direction.

These ideas are not revolutionary. Many NFT artists, even within 1HIVE have picked up on the fact that creating art to serve a community is a good way to earn tokens from that community.

PlsrDAO was formed due to an artist and a community forming around a Uni v3 mp4 Meme NFT – which was then fundraised to benefit charity.

The NFT and DAO formation went on to be featured on bankless.

There are a number of roles that Artists and Creators can take in building out web3 integrated projects, but the Project Based Marketing role is where I see the most impact being generated.

Fundamentals / Tik Tok Context: $CUMMIES That’s a CumRocket Advert. It’s a 33 second video that launched a token on BSC which ended up maxing out at around 400M MC. In addition to this, there have been other Tik Tok Adverts and launched projects: Safemoon [and forks] Various Doge Forks A project called $SCAM 1 min Doge Musical: These projects, combined with the WSB Meme Economy vibe ended up directing initial hype speculation which ultimately resulted in projects like Safemoon hittin…

Astra is a Permissionless Swarm sort of like Morphosis, except the focus will be Project Based Marketing, and not coding.

I will be leading the project by example, and these posts are meant to act as “Playbooks” for how I’m doing what I’m doing, so that other creators associated with 1Hive and surrounding DAOs [Metagame / Metafactory / DAOHaus / Colony] can take from these ideas, and develop their own capacities to be independent operators.

As the Swarm continues to develop, I see Astra turning into a multi-community, project based marketing DAO / Worker Co-Operative, with Grant incentives derived from a community managed Treasury on DAOhaus.

My Target Project Focus for Q3 will be Agave and Honeycomb.