Celeste has been live for many months now but there only have been 3 disputes. I expect that we will see more and more use of it as new gardens (and garden covenants) are created, but still, I don’t think gardens should be the main use of Celeste. It’s concept it’s so interesting that it would be heavily underused if we were only going to use it to dispute votes.

I think we should put in the hands of the community the ability to create private contracts that could be resolved using celeste. I’ve been working in some very quick mockups to show the concept and start a discussion around what I call Celestial Vows.

Celestial vows will be a dApp that leverages the Aragon Agreement app and Celeste, allowing users to create ricardian contracts among them. We could consider these contracts Vows that you do to the other people involved in front of Celeste. 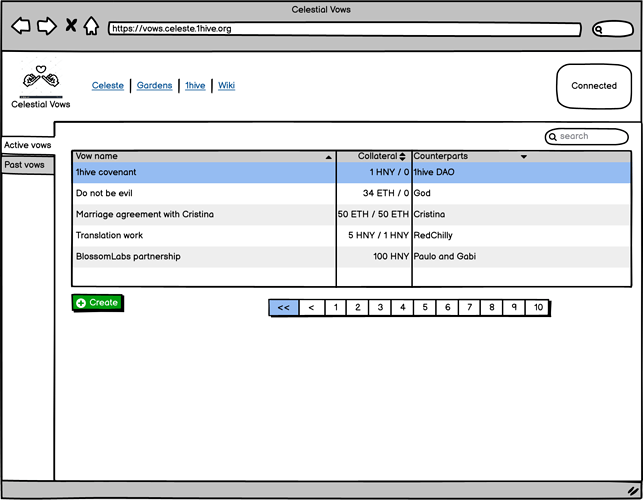 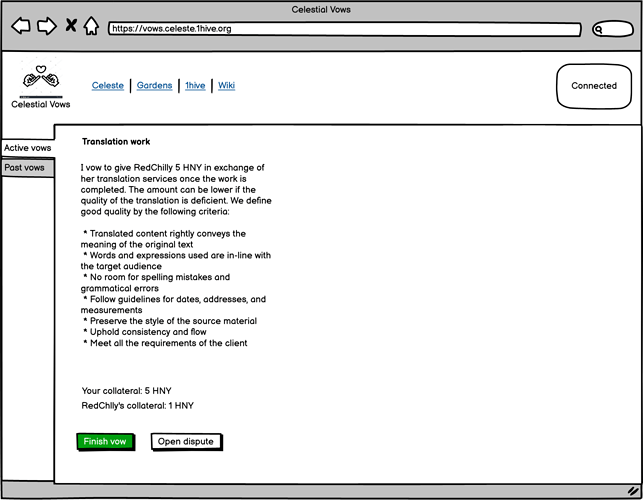 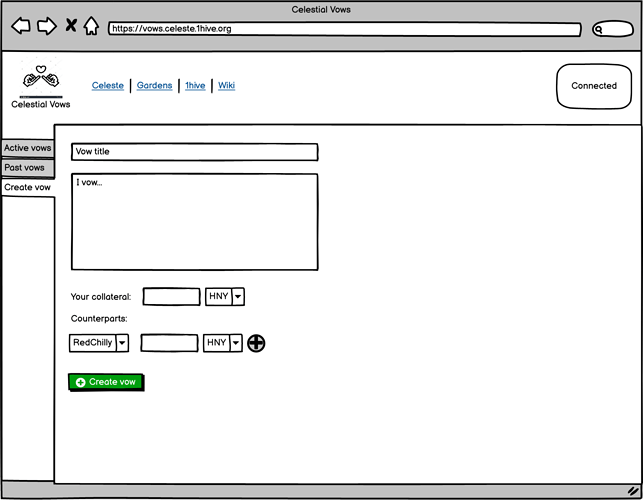 This idea clearly needs a lot of refinement and validation. I’d love to hear if something like this could be of real use, and which real use cases you would use it. If we find interesting use cases, I will be ready to start coding a minimum viable product to be tested in these scenarios.

Please, let me know what would you use it for in the comments.

@willjgriff pointed me out that there is already work started by the quest swarm which is a great use case for Celeste.

I think Celestial Vows could be a great user-centered interface in which everyone will be able to see all their signed garden covenants, quests, and other private vows.

Do you imagine to pay $50 for every time you miss something that is important for you, and send automatically the amount to the friends who did the task that was important for them? It could be a one of the individual vows you do with some of your friends, your co-workers, or even with an entire DAO. The possibilities for private contracts are endless, only topped by imagination.

We can also make the contracts private by default (encrypted only for the parties) and make it public (publish the private key) if one of the parties decides so (because they want to raise a dispute to celeste). There is the possibility to have one private key per paragraph, so the disclosure can be partial, only making public the parts of the contract relevant for the case.

At Blossom Labs (independent research team dedicated to test with new ideas to bring to 1hive), we have already played with Ceramic, IDX, and DID encryption, and integrating it with Celeste could be a great challenge to accomplish.

I’d love to hear about other use cases that could fit Celeste Agreements, or if you would make use of the ones that already have been mentioned.

There are really so many usecases for conviction voting and Celeste that we can think about. The ones that you mentioned are really good examples for freelance work or even marriages or lending and borrowing.

I had one cool idea when Celeste was launched and i keep leaving it for future because it is a bit complicated and ambitious.

I was working in news media so i know how much effort and of how much importance is content curating . The platform i am envisioning can used both Conviction voting and Celeste for creating articles and letting the stakers/voters be both content creators, editors, curators .

Let’s say we have a popular news media for DeFI , cryptocurrency, or even entertainment,nfts etc. It can be really anything. We want to allow everyone to publish , we want to be able to reward everyone for that but we also need to ensure that the quality of the content is there.

Submitting an article pre publishing would need to be like a conviction voting proposal, then the curators could stake their HNY to vote what should be published. Eventually Celeste could be still used if some articles are being voted but they don’t necessarily follow the rules and standards.

This makes a lot of sense and i can see this being used for a wide range of things. Quests being a great one.
My question is on how does celeste manage to resolve these non binary contracts? Does this imply and upgrade to Celeste itself? Would be nice to elaborate. But definitely something i would use!

This could be a great tool for DAO2DAO coordination, for conflict management, and for legal contracts. I’m sure it would be useful for projects like Gravity DAO, where we promote peer to peer agreements offering mediation services.

We worked on this idea during the Road to Web3 hackathon, and did this follow-up proposal:

Proposal Information Proposal description: Unbreakable Vows are private legal contracts that can be created and signed by parties to give legitimacy to peer to peer agreements. In the Harry Potter’s Wizarding World, an unbreakable vow is a type of binding magical contract cast between two parties, that if broken by either party, would result in the imminent death of whoever broke the contract. In the web3 world, the party who breaks the vow only loses some collateral (tokens, NFTs, etc). This…