Rhizome is a Swarm of Project-Oriented, Media Channels, competing against each other to to produce One Public Skillshare Course each week.

Each Channel is its own Team.

If a Team successfully ships their weekly Course they qualify to receive a % of a monthly HNY Distribution. This league lasts 16 weeks [4 months of distributions].

The Competition for % is determined by metrics shared when each team posts about their course in the Forums for that Month.

Since this Competition is meant to be community building, each monthly Channel Update will share strengths and weaknesses of their attempts that month, so as to help other channels do better the next month.

The structure below provides strategy and framework. 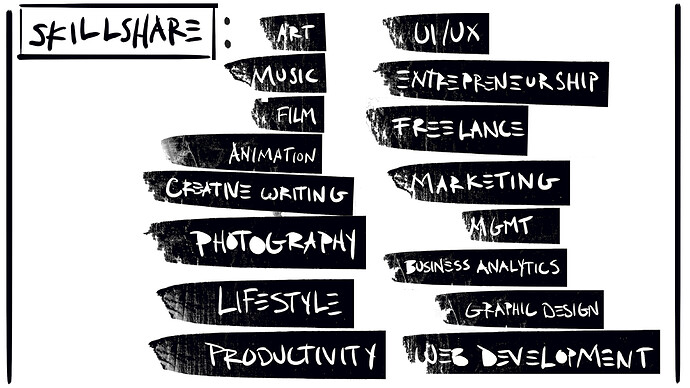 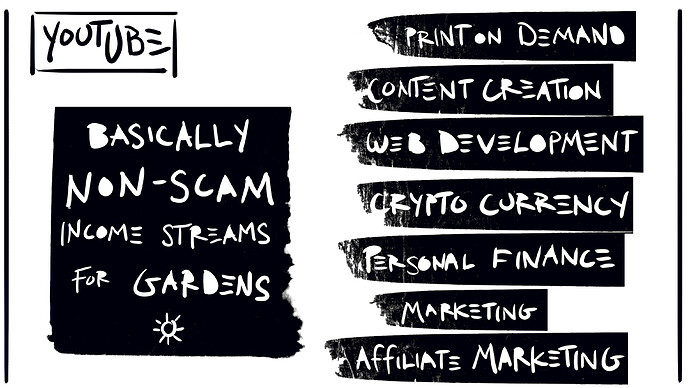 Building one of these channels requires a commitment to experimentation via weekly project cycles, and accumulates more value, skill & outreach with each successful weekly shipping of a Course.

General Rules: [These are clarified in the Skillshare Guidelines]

The maximum you can ship on Skillshare is One Course each Week, but the impact of one well-crafted, Public course each week has significant splash effects:

As you can see, the engine of this project are the weekly project driven courses – and these are pushed forward by short and long term incentives for these teams to build out channels which educate and provide meaningful training to people trying to learn new skills.

This is basically a decentralized marketing and onboarding push as an extroverted service which 1hive and metagame are providing for other DAOs and wider audiences – while setting themselves up to have sustained long term income following the completion of this Incubation period.

The hope is that these channels / teams will become small businesses, and also talent onboarding funnels, and DeFi | DAO brand ambassadors representing 1hive and metagame.

The project is specifically designed to front load the rewards with HNY, while requiring an accellerated pace | partnerships | small project experiments and the growth of channels – in order to gain the most out of the project.

If teams look at this as a runway for launching a monetized youtube channel based on small project execution and skill training – while also exploring partnerships with different crypto tribes – I think this will go very well for people, provided they commit to the project cycle and pace. 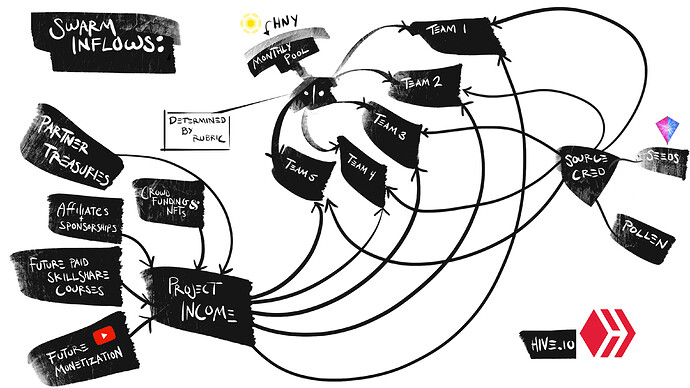 Weights for distribution have a basic score which is determined by performance, and shipping at least 3 courses a month. 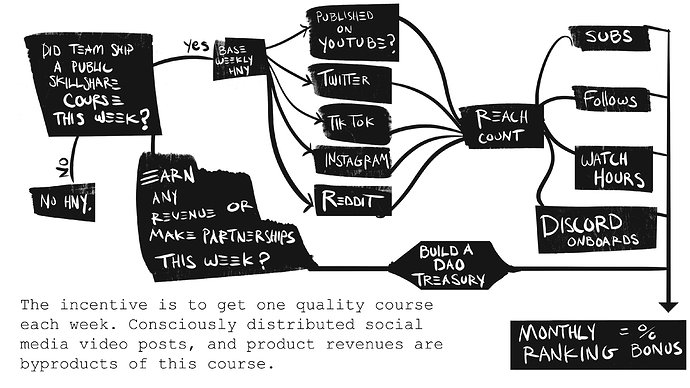 These trollish characters below here are not unique to 1hive, and do not represent specific people – but more feelings that I have experienced, and seen in different discord projects in the last couple of years. 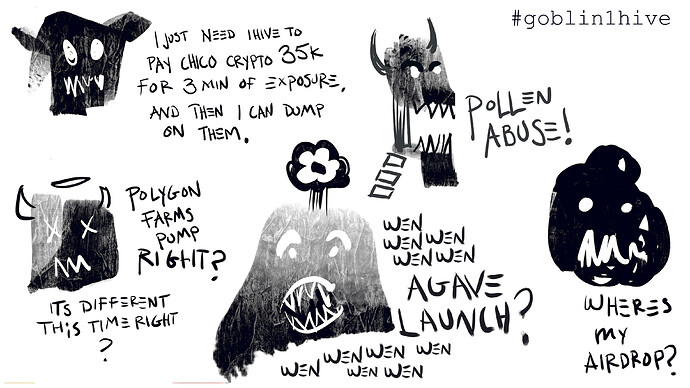 Observing these unproductive ways of participating, during severe market dumping events, have made me continuously return to an idea that we need less speculators, and more project managers – not just in 1hive, but across the multiple cryptocurrency ecosystems.

Project Duration:
This is a 4 month experiment, with monthly distributions, and a maximum of 1 Course per week, Per Team.

When the experiment is over - Each team will make a final evaluation summary of their Channel Growth, and share their victories and failures in a reflection post.

There will also be monthly synopsis forum posts by each team.

The project will start out with 5 Teams. If a Team does not submit at least 3 Courses in a month, they drop out of the rankings, increasing the size of the monthly reward pool for the remaining teams.

For the creation of a Team - I would suggest picking a set of external DAOs to partner with or do work for. [I have listed quite a few of them in this article.]

I would suggest we reserve a minimum of one Team for MetaGame, so they can run an Active Raid, and participate if they like, given that this matches their roadmap, and concerns playbooks, and we would do better to be more closely partnered with them.

I will organize this experiment – and I’d suggest the current members of Buzz DAO can help where more trust, impartial opinions, or multi-sigs are needed.

There are three open slots.

Amount of HNY requested:
60 HNY goes to the Reward Pool, to be distributed to the Active Teams over 4 Months.

I will also run the project, and accept a BuzzDAO Stipend.

Half of the HNY is to be Market Sold into AGVE immediately, paired into LP Tokens, and deposited into HoneyComb - Locked at incremental rates so that 1/4th of the supply will be released each month in the Honeycomb Contract.

Reward Pool Address will be a Gnosis Safe with LP – [unless someone has a better suggestion - maybe there is already a Buzz DAO Gnosis Safe.]

As each Locked LP Token is released, that will be distributed amongst the Valid Teams for that Month.

There are probably some loopholes and errors here and room for criticisms, and I’m open to making them work.

This same structure could be used to create a frontend Dev Onramp, or act as a learn by teaching // marketing outreach for morphosis or raid guild.

I’d like to see this project through for the next 4 months, and see what the results are – I am confident that by repeating these processes, we could actually become a marketing force in the DAO Ecosystem, and partner with all kinds of neat projects.

Metacartel and District0x have also expressed an interest in this project, as I have reached out to solicit them. District0x has mentioned that this is the sort of proposal that they would be interested in supporting, and I have been instructed to follow up and inform them if / when 1hive funds, and how much. Presumably, so they could sponsor some teams and form a small league for the first season.

I really like how you came up with this concept and i think this is well aligned with the standards and culture of 1Hive which stands for - building community,creativity and productivity and not paying for the shills.

The thing that you already have full plan for this is a big plus IMO and i think the tempo of 4 months
( 1 course per week on skillshare, building the social media channels,youtube videos etc.) can be effective and productive .

Will be following this thread and come up with some additional ideas later but it seems very well thought and something that i would support.

These trollish characters below here are not unique to 1hive, and do not represent specific people – but more feelings that I have experienced, and seen in different discord projects in the last couple of years.

Those trolls made me laugh

I’m game to join up with anyone who wants to run a team. Maybe something to do with safety and not getting rekt? DM me on Discord

Also, the trolls are superb.

Thread added to Metacartel, with answers to some questions, concerning the possibility of them joining up with 1hive for this project. 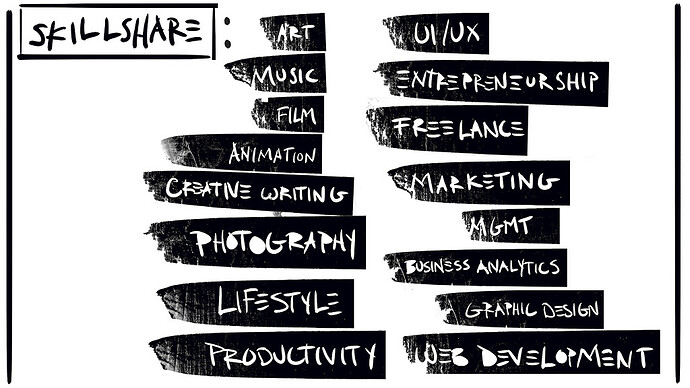 Hey MetaCartel - I was listening in on a DAOHaus call recently, and I heard some talking about Chilis, and the ambitions of doing some work focused on using a basket of tokens to incentivize projects. The post above is an idea I wrote up for 1hive...

This strikes at the heart of what could ignite a project in a sustained way. People are already leery of paid shills so to come at it with this organic approach should be better received by the community than a half-hearted and expensive paid shill who may not do a particular point justice. Nicely fleshed out. I’m in for a video at least! I like how you’ve identified the low-hanging fruit by looking to alternative platforms like Skillshare, that is rich in knowledge hungry students who may begin their entrance into the crypto space with hand holding by a 1Hive tutorial. The brand implications of this can be long-lasting, building goodwill in the most solid way imaginable.

Im glad you see the objective, though just a video will bot be sustainable. It needs to be people building out channels - i think - as the value is in the long term consistency and audience building and not just the one off.

The skillshare course is the minimum viable product / pace for this.

To your other point - podcasts and such are a good idea also - i just used this structure because i thought it was repeatable and supported by multiple income streams and efficient.

Thanks for reading and commenting.