Its been brought to my attention that Meta Cartel is organizing a DAO-focused in-person event called MCON in Denver next month. The intention is to bring together the broader DAO community to share experiences and make new friends. 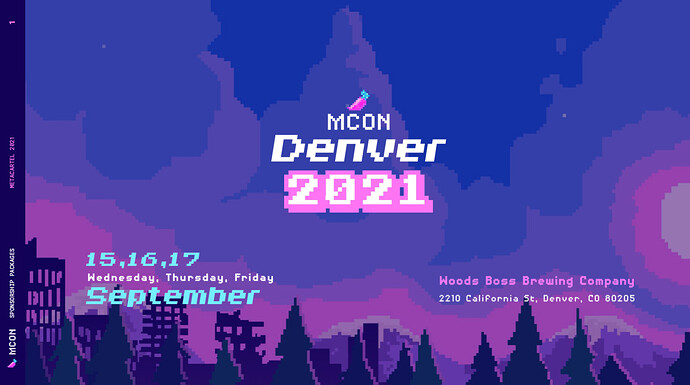 1Hive has been invited to sponsor the event, I’ve shared the sponsor pitch deck that I received as well as added a some relevant screenshots to the post. I think it is an interesting opportunity for the 1Hive community to get more exposure among DAO enthusiasts and a great opportunity for 1Hive community members who are interested to coordinate an in-person meet up. 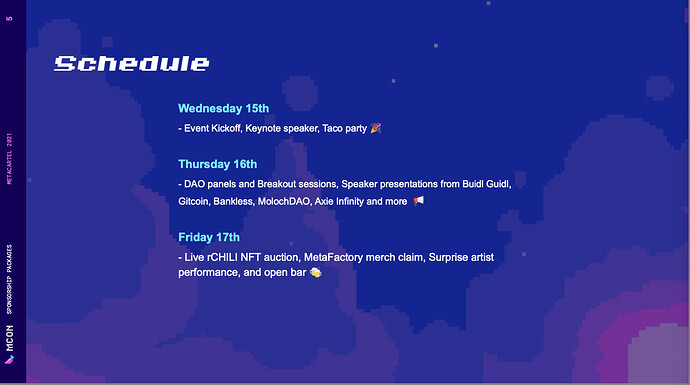 Total cost for 1hive would be between 5-10k DAI depending on the sponsorship package, and would get us up to 25 or 50 spots for 1Hive community member attendees among other perks. I don’t have a sense of how many people from 1hive would be interested and able to go (hence the poll at the end of this post), but I suspect we probably wouldn’t need 25 spots and likely would be looking at more like 5-10 depending on interest. I would still support doing the larger sponsorship anyways, since the other perks are nice and it seems like a nice way to for 1hive to get more involved in the Meta Cartel ecosystem. 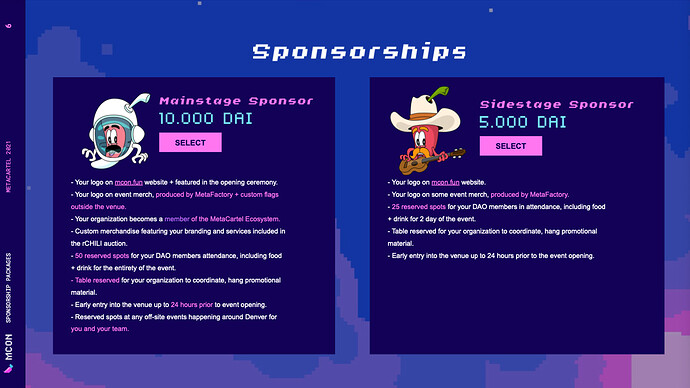 The impression I get is that the event organizers want to source funding from DAOs that will actively participate and contribute to the event with their presence, which is cool. I think the way to think about this is that we are pitching in for the costs of the event so that as a community we can show up and participate in the event, as opposed to treating it as a more traditional marketing expense. So before putting up a proposal I’d like to try and get a sense of what people’s sentiment on 1hive participating in the event, and also who individually might be interested in attending (keeping in mind that individuals would need to cover their own travel costs, covid is still a thing and variants add additional risk, and its somewhat short notice given the event is in about a month).

Looking through the other sponsors and the Speakers, this definitely looks like something 1Hive should be affiliated with. Strongly support it!

I could probably swing Denver for those dates too…

I would love for 1hive to be a sponsor of such an event, I think it’s a great opportunity to add some exposure and to meet interesting people from other DAO! I won’t be able to attend with covid, but if you guys take the personal decision to attend, please be careful with covid

I think its an awesome idea, organic marketing, which is the best kind imo, and just perfect fit for the demographic 1hive products are aimed at - Id love to attend but still need to read up on any restrictions that may apply considering covid and such

Very exciting opportunity despite covid; definitely support and can make it to Denver : )

I would love to assist, I’m planning my logistics at this moment! Who else is going?

There may be others going who haven’t coordinated with me, but I know of gabi, Fabri, twells, paul2, meta, cris, and pab

Hey Luke,
MCON happened a week ago, some of you guys even managed to go and meet up.

Since 1hive supported the event, can you share what happened (briefly) and if the community can expect some sort of benefit from the Mainstage Support of 10k offered?

The event was really good, I’m catching up on a lot of things this week so don’t have time to do a longer write up, but here is a brief summary.

The event felt like a large, extended meetup, in that it was very community oriented as opposed to a conference that is essentially designed to promote sponsors as much as possible. It was a great opportunity to connect with people in the space and also for 1Hive to be seen as a contributor to the ecosystem. That was my main goal with sponsoring the event, and coming out of it I feel like that was a total success.

In terms of expected benefit, I don’t have too much concrete to add there, the value is in relationship building and I expect that to manifest itself over time.

This MCON media kit is so great. Love the retro gaming feel.

Thanks for your feedback. If anyone else participated and wants to share a few comments on it, i think it would be great.

For sure. MCON was one of the highlights of my year tbh.

The venue for the conference was a brewery connected to a coffee shop that had enough space to seat ~200 people. We’d brought a banner, stickers and t-shirts thinking we’d set them up, but when we got there it was pretty clear that wasn’t the vibe. There were talks and workshops going on all day, but at any given time most people were just hanging out, getting coffee, beers, food, and either chatting it up or on a laptop satisfying their diagnosable Twitter/Discord/Crypto addictions.

It was small enough a group that you could talk with anyone, and everyone there was working on something interesting, so it was pretty awesome. Without giving any names (since that feels weird) here were just a few of the good convos I had:

Also just getting to finally put faces to names - both in and outside of 1Hive, was so awesome. And actually being able to talk crypto in the real world. Whenever I bring it up with friends and fam their eyes glaze over and they have to go to the bathroom all the sudden…

Thank you very very much, if you don’t mind, i’ll be in touch with you to add a section in the September Monthly Recap, as we should spread out the fact that 1hive is online, but live in the real world as well.

For sure! That sounds great.

I was only there Friday but had wonderful conversations, a few times discussing 1Hive dynamics. Thanks to this community for sponsoring, and so glad we could welcome some of you to Colorado!

Hi stonky - I don’t have much to say about MCON other than, much like @paul i can easily consider it being a highlight to my year. I was able to meet people ive been working with and discuss some projects ive been involved w for several months now in person, which was nice. As per value obtained from the sponsorship I 100% agree w @lkngtn when he says this -

In terms of expected benefit, I don’t have too much concrete to add there, the value is in relationship building and I expect that to manifest itself over time.

personally, the experience was very informing and eye opening to the potential and awesome community that the Ethereum ecosystem has been fostering throughout the years, a lot of the people there (including me) were going to their first ever crypto-related event, and so the vibes were very friendly and it felt like almost everyone was super happy to be able to meet each other - it was also nice to be able to talk about stuff regarding the canon project and the genesis collection with both Luke and @fabriv, I believe this gave me a lot of insight on the future of that project and overall the history of 1hive as an organization from the very beginning.

I’m a bit of an introvert and also have a lot to learn so I went in without many expectations regarding networking / business stuff like others may have but I really enjoyed the whole time I spent in Denver, I think if the opportunity arises next year, everyone who can should go; who knows, maybe if we gather enough bees the next occasion we can even make our very own side event

thanks @pab , i appreciate any comment, great to see it was a successful event for everyone!

Wish I’d run into you there! Would’ve really enjoyed talking.

Great work on the Cryptoeconomics piece, I learned a lot from it + all the related links you and Vitalik cited. It’s cool to see those getting so much traction and pushing people to think about this stuff