good afternoon.
I hope you are all doing fine. Here you have the Monthly Recap for the month of September.
I want to thank those who helped me and survived my constant messages

Gardens on xDai has launched! Our first 3 communities are live:

The Bright DAO launch announcement gives more details on their new Garden community. Many more communities are in the pipeline

More updates from Pollen in the next Monthly Recaps.

Support Swarm has been actively working, making it easier for new individuals to get onboarded to 1Hive, help solving specifically technical problems that people may encounter using 1Hive’s products, and educating those individuals to engage in blockchain transactions in a secure manner.

Our new proposal passed and you can check it here: Community Supporter 7th Month Proposal -

As there was no new documentation to produce during the month of September, the Terra Swarm has not been very busy. However, at the beginning of October we will have a new meeting and we will formulate a new important funding proposal. In fact, we plan on translating the Gardens Wiki page, updating the 1Hive Wiki page in all languages and much more. The proposal should be up in the next week/10 days, and we hope to receive sufficient support to start working on producing updated and translated documentation for everyone.

Agave had a busy month. In our AMA on August 31st we announced the launch of the lending platform on September 1st. The “soft-launch” was meant to fix a few minor UI bugs users may experience while experimenting with the platform.

In September we also migrated our DAO to a Garden, an overwhelming support of the community that voted from the 10th to the 15th of September.

Our initial marketing efforts are focused on creating partnerships with other projects. Following this line, on september 26th, the $STAKE community is voting on adding Stake liquidity incentives on Agave. The votes, still ongoing at the time of writing, received a huge support. 150k Stake were used to vote Yes vs 44 Stake used to vote Against the proposal.

On September 30th we are also hosting a new AMA, inviting Sacha from Gardens to talk about the DAO migration, and to update the community on the further developments of our DAO.

More updates from Celeste in the next Monthly Recap.

Buzz Dao swarm is continuously following the progress on 1Hive and publishing about the happenings and projects on 1Hive.

We had dedicated more time to bring 1Hive TV into life thanks to TWells who produced high quality video content and organized the 1Hive Media. You can subscribe on the 1Hive youtube channel here to stay up to date with the latest videos .

We also have now bi-weekly trivia scheduled on each 2nd Friday , in which people are getting interested in and is good for expanding our knowledge. Giving out rewards in Honey for the most skilled participants.

You can see the calendar to check the 1Hive Trivia schedule : Calendar - 1Hive

Regarding the other activities we want to note the success we’ve had so far with the Hedgey Finance team on bringing Honey option to life and working on 1Hive Treasury pilot project. We are thankful to the Hedgey Finance team for executing the pilot flawlessly so far, more info here :
https://medium.com/hedgey/pilot-review-1hive-using-hedgeys-covered-calls-fortreasury-diversification-ab63e275aa3b
We’ve been talking with xDai team to bring incentives in DeFi together, we had meeting with CurlyBracketeffect from Rabitthole who explained how we can organize quests on Rabbithole platform and we are going to meet up with xDai and estimate the potential of these campaign and how can we execute them in cas of a joinned collaboration.

We are preparing to write more news on our Collaboration with Connext and Li Finance on xPollinate bridge and we want to bring new products together,also we should add here that we are looking for developers to enable more functionalities to this bridge and looking forward to make Honeyswap a crosschain swap.

We are still exploring new ideas with xDai, Agave, Polygon, Elk Finance, TEC, HOPR and others and keeping in touch with our friends, always looking to expand our reach together and grow.

Prototype time is over, we have a full stack quest system linked with Subgraph and IPFS.

We can now (within Rinkeby) :

Morphosis swarm has been on hold while Gabi has been busy with Gardens.
Vyvy-vi has offered to arrange a git and GitHub class for 1Hivers, in celebration of Hacktober.
Keep an eye on the Morphosis channel for details.

Also, remember that Gabi has four weeks worth of ethereum coding course work available at the Discord server. If you have questions about the material tag Gabi on the Morphosis channel at the 1Hive Discord server.

The Canon team passed a proposal for rewarding some of its members’ past contributions.

An event called “Seed Stories” was hosted on the 1Hive discord server’s radio channel; to listen to some stories told by the seeds about the earliest efforts on building the DAO, you can watch snippets in the latest 1HiveTV episode.

In-person conversations around 1hive, its culture, the very beginnings of it, the learnings from some of its members so far, etc. were held by some swarm and DAO members who went to MCON 2021.

Hivecraft reviving! The IP is: hivecraft.mcpro.io 2 The version of minecraft to play is 1.17 and if you have the bedrock don’t worry, you can also access thanks to the BungeeCord in java servers and also using Geyser + Floodgate plugins to allow bedrock clients to connect to your java servers

We finished making a system that links your xdai wallet to your minecraft username thanks to rad casale. We made a web3 page that connects your metamask wallet and stores your address, Honey balance, and Honey Plots balance in an API along with your minecraft username. Then the hivecraft server listens to the API and connects the Hivecraft users with their crypto wallet. 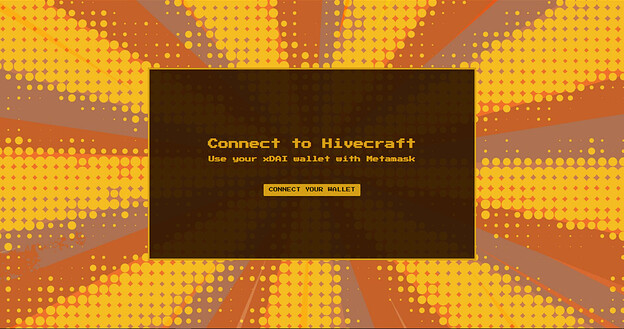 With this now we officially will set the release for the Hivecraft Honey Plots NFTs in a marketplace! We have chosen Unifty to sell them, having in mind its one of the few marketplaces where we can sell the nft for HNY, for a price of 0.07 HNY.

This time we are happy to announce that very soon there will be a 2nd NFT Plots Airdrop to those 1Hive members who haven’t received their plot yet in the Hivecraft Server by this Friday, October 15th

In order to receive the token for the Honey Plot: Join the hivecraft server and link your wallet with the command /walletlink.

We will announce and give all the info about it during this week through the 1Hive and Hivecraft discord.

There’s another surprise announcement we’ll be dropping during October, so stay tuned

Biz dev has been working on a number of partnerships.

Autonomy’s code has been audited, so we’re ready to add stop losses and limit orders to Honeyswap.
There currently are no funding proposals for Tulip swarm.
There is some discussion as to whether the Tulip swarm should become a part of Gardens.

Representing 1Hive at the conference were pab, twells, fabri, lkngtn, metaverde, gabi, fiore and paul2. Given that our work and life in 1Hive is so digital, it was a hell of an experience getting to talk crypto in-person, and get to know each other and other people in the greater DAO community much better. Conversations with other DAO members helped form new connections for 1Hive and raised awareness about the great work being done here. You can read more about the event in the MCON Forum Post in Discourse.

There’s currently an audio logo discussion started by harsh24, Efra and comandoburrito, you can still discuss the demo proposal they’ve presented a few weeks ago just in case you wanna bring up some feedback to the table on this topic.

It’s a lot to read, but I hope you went through it all! Thank you for reading so far. See you for the October Monthly Recap!

@Stonky great effort to keep the monthly recaps going!! These are so useful for me … as they give me a birds eye view of the hive and all the super cool things. Really excited for the improvements coming to honeyswap and Hivecraft from this update!! Thanks

Thanks again @Stonky for keeping us with all the news of this last month! <3 Thx also for your help

This is so cool. We also had another great month.
Good job everybody and thanks a lot @Stonky for the putting this all together.
Together we thrive.

This is amazing. Wonderful compilations.