It has been a while since 1hive forked Aragon’s Token Manager to include the hooks feature, and I think it is worth reviewing if they are still useful or if we can replace them for better solutions.

First, let’s explain what token manager hooks are and what they have been used for.

As you may already know, Aragon / Garden DAOs are multi-contract decentralized applications living on the blockchain using one or many MiniMe tokens to govern themselves.

The Token Manager app is the contract that usually controls the MiniMe token. Most DAOs have one of those, although sometimes they are not needed when the DAO is using an external token.

The other contracts of the DAO usually make use of tokens, for example the Voting and Conviction Voting apps to have a census of the addresses that can vote on a particular proposal. The coordination between the tokens with those applications is key for the security of the DAO.

This coordination is not always easy. For example, in order to implement correctly a voting application that creates votes at any discrete time such as in Voting, we have to take a snapshot of the token at the block in which the vote was created to be able to know later how much tokens each addresses had in a certain point. In order to accomplish that we need to take checkpoints each time a token is transferred, with the computational cost (aka gas fees) that it takes.

What’s worse, checkpointing is not enough when we are voting on proposals continuously. Conviction Voting does not have end dates for proposals, so it has to account for tokens that were not there in the moment of each proposal creation, as well as the changes of support from one proposal to another at any moment.

The Hooked Token Manager is the fork of the Token Manager in which we included the hooks feature to deal with these cases. In Garden DAOs, the Conviction Voting app is registered as a Token Manager Hook so it can execute a function every time a token transfer is made. In this particular case, this function checks if the token balance of the sender is going to be lower to the amount of tokens supporting proposals on conviction voting, and acts in consequence withdrawing as much support as needed in order to not exceed the new token balance.

Another use case for Token Manager hooks is token semi-transferability. Autark Labs was the first to implement this in Aragon by forking the Token Manager as well to make tokens that can only be transferred to allowed addresses.

Honey also used to be a semi-transferable token when we were using Dandelion Voting in 1hive. Instead of using the Autark solution, we implemented this feature as a Token Manager hook because they offer a more general and composable approach. The purpose of the hook was to mimic Moloch DAOs in order to make Dandelion DAOs do not allow to redeem one’s tokens (to ragequit) if one has recently voted yes on a proposal.

This was in the pre-Celeste version, but with the advent of new disputable apps, the only hook that is used right now in Gardens is for Conviction Voting. This is how a Garden v1 looks like: 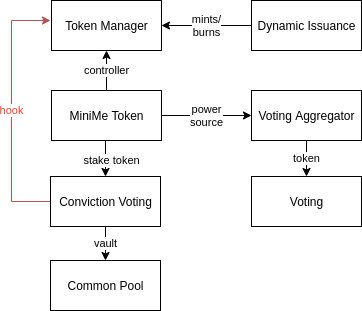 This hook is only needed on transfers of tokens that are supporting a proposal. The fact that the hooks are executed in each token transfer makes them very gas ineffective. It was not a big issue in xDAI, but since we plan to migrate Honey and Gardens to Arbitrum, we know that the old gas problem will raise again.

Thankfully, we are in a good position to deprecate Token Manager hooks completely using some of the contracts Aragon One developed for the Court.

The Staking app can be an alternative to most hooks

When Aragon One implemented the Court, they faced a similar problem than us when they designed it. They needed a contract that had control over some people’s tokens and act when those tokens where withdrawn (such as we need in Conviction Voting). They also needed the people with staked tokens to be able to vote as if their tokens were not staked but in their wallets (like us).

We solved this dilemma implementing the hooks: we reflect each address token balance during all the time so voting works perfectly, but we need to perform checks in each transfer.

Aragon One went the other way around: they stake the tokens (transfer the tokens to a contract implementing the ERC900) so they have absolute control over them (they can act when they are unstaked), and then solve the voting problem aggregating voting power from both the token and the stake contract.

I think Aragon One’s idea is more complex but it is a better solution for this problem, since it unlocks the following possibilities:

This is how it would look like a Gardens without the Hooked Token Manager and with the Staking and Voting Aggregator apps. Note that we use only one Staking app per token, so it could be shared among various Gardens: 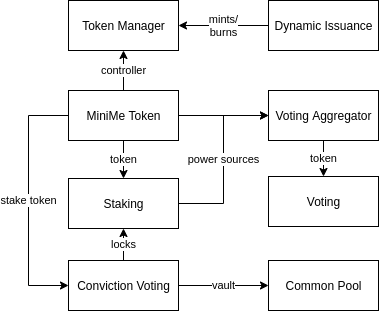 Supporting a proposal in Conviction Voting would require to lock tokens within the Staking app, defining Conviction Voting as the Lock Manager. The tokens would only be unlocked by withdrawing the support in the proposals.

Staking and vote aggregation is useful in many use-cases in which we used hooks for, but there are cases in which we want to interfere with tokens transferability even if they are not staked. Examples of these would be:

For all these cases we could implement something similar to Autark’s solution: an oracle that tells the token if it can be transferred or not. Unlike their solution, I would suggest to reuse as much as we can the ACL oracle feature that AragonOS provides.

A good example of this would be the Dandelion Voting. It implements an ACL oracle that returns false if the sender address has voted yes on a Dandelion proposal recently. This could be reused directly as a transferability oracle checked by the Token Manager! We could reuse ACL oracles if the Token Manager offered compatibility!

Token Manager hooks have been very useful for the 1hive architecture until now but they are expensive in terms of gas and constrain the capabilities of our Gardens. This document has exposed a solution that uses a different approach to design the next version of the Gardens’ apps.

These are the proposed changes to apply to our apps:

These are some things to take into account if we choose going this way:

We’ve been discussing issues with the minime token contract in Tulip swarm. It seems to cause issues pooling, trading, and even sending Honey on xDai. Is it possible that not using hooks will solve these issues?

Yes, this is a clear UX pain point that you have to increase the gas limit manually sometimes in MetaMask, I’m not sure it’s going to be solved completely by removing the hooks or if the problem is also sometimes caused by the MiniMe itself, it is definitely worth studying.

Thank you for taking the time to write this up. Wonderfully informative, as usual.

The possibilities this unlocks with regards to multi-token gardens are incredibly exciting.

Would love to see this in a gardens v2.

To clarify, there is another token manager hook in gardens that is not used: the Unipool contract used to give rewards to external tokens.

These are the comments of @willjgriff on the issue:

It doesn’t actually need to be a hook since those tokens aren’t transferrable. But I built it before that, so we can modify it to not be a hook and maintain that functionality just requires a bit of work.

So, if we use the staking app in the future for wrap and unwrap external tokens (now we use the Hooked Token Manager), we could modify the the Unipool contract to be compatible with the staking app, so no token manager hooks would be needed anymore.

The only big negative I see with tis move is the loss of some really nice UX.

When you have a staking app, you lose the tokens in your wallet, and they go to the staking app, so you might forget you even have tokens there and if you want to transfer them, it’s harder, you have to first go and unstake and then transfer.

I love the UX of seeing the tokens in your wallet and still being able to vote… and then if you decide to provide liquidity somewhere, you can just go do it, no static.

There is some benefit there… The worse UX does make it harder to sell your token… but that said, when there is good UX in crypto, I cherish it. I honor it and protect it. Like an endangered baby bird. Or a super rare NFT… Taking a step back on structural UX hurts.

Than said, there are lots of requirements, and if there can be lots of thought put into improving the UX for users in other ways (like making an approveAndStakeAndVote() function so users can buy a token and then vote with 1 tx, that would ease most of my worries. And then also have end user UX in the forethought of our minds when building everything else as well!

For instance, I would love to see Gardens move away from talking about threshold and conviction and start denominating voting power in $.

More on that here:

Discussion: Using DAI as a unit of conviction instead of percentage

@GriffGreen commented on the figma: 75% conviction needed.... doesnt really mean much. Using the Threshold formula as a part of the equation... you...

What a great news! Thank you on bringing this new multi-contract decentralized applications project, this make us in something better.

great news! i think so !come on!