Recently there have been a lot of new proposals created on Honey Pot, which, of course, is great since it shows that this community is engaging a lot with the tools that they have at their disposal.

However, I have to say that some of these proposals and the nature of how they have been proposed is, to be frank, sort of stressing me out.

In this thread I would like to discuss how we can create good, concrete proposals as a community, and how we can tell the good ones (from a formal perspective) from the bad ones. Even if the idea of a specific proposal is good, the proposal might suffer from a lack of “actionability”.

I would like to demonstrate some proposals that are currently up that I think need a lot of improvement before we as a community should consider voting yes on them - some of them are almost at the passing threshold and some have no votes on them currently.

This proposal might be what the community wants (I am indifferent to the proposal myself), but it lacks a lot of actionability. What is going to happen if this proposal passes? Who is going to apply to all of these exchanges?

A proposal that requires some sort of action, be that development or communication with third parties, should, in my opinion, have a forum post or similar that describes why the proposal was made and how the proposer intends to fulfill what the proposal is about if it passes. The “Read more” link of this proposal is simply a Coingecko application form.

This proposal has no “Read more” link, so there are a lot of unanswered questions that makes the proposal extremely unconcrete, even if the idea might be what the community wants (which is my general perception). For example:

It’s not that there are some details missing in the proposal; there are none.

This proposal is simply a question. There is no link to a forum thread or any other similar place of discussion or an elaboration of what the proposal is about.

Proposal #43: Airdrop 1 HNY for the first 1000 registered on the faucet

This proposal is requesting 1000 HNY with no discussion link and not even a public name or anything of who created it. If this proposal passes, the proposer will get 1000 HNY in their own wallet, and could, if they have mal intent (which I hope not), just run off with it.

Generally, I am very happy that there are a lot of proposals on Honey Pot, but I would like to request that we as a community are better at providing links to places of discussion and concrete action plans.

What ideas do you have for improving the proposal process?

The honeypot interface is not requiring a link for the proposals, so I think this is a good place to begin with: requiring all proposals to have a link to the forum. I’m currently doing that.

I also propose to have a new section in this forum called Proposals in which we post signaling and funding proposals. We could rename the

Proposals for that end.

We can also set the following template from the Aragon’s CV pilot to help cover all things needed in a proposal:

Other DAOs require a minimum cost in order to create a proposal. It is a way to discourage users from posting proposals with no sense as well as spam. Of course, this is also a hurdle for proposal creation and we do not want that, but something has to be added in the process so proposals have a clear description and make sense.

I think requiring a link to a forum discussion is a great way to start deterring willy nilly proposals. Also, if there was a very small fee to add a new proposal would help also. Although setting a small fee would create a small hurdle, I feel that anyone interested in this community would not be deterred from proposing because of a small fee.

I renamed the section to Proposals and set up a template. Tomorrow I can make the link mandatory in the honey pot form.

Would you be willing to give feedback on a proposal I am working on?

Sure Marc. I will be happy to do so.

Great thread. Yes, proposals need to be more structured and I like the structure SEM added above. Also a minimal amount of HNY needed to start a proposal is a good idea imho, and we could even add the functionality (or is it there?) that the proposal ‘stake’ amount only gets 100% refunded if the proposal passes. Else you could lose 25% or so, which will prevent spam proposals.

By the way, I just checked it out and saw that the link field was already added. 2 remarks: 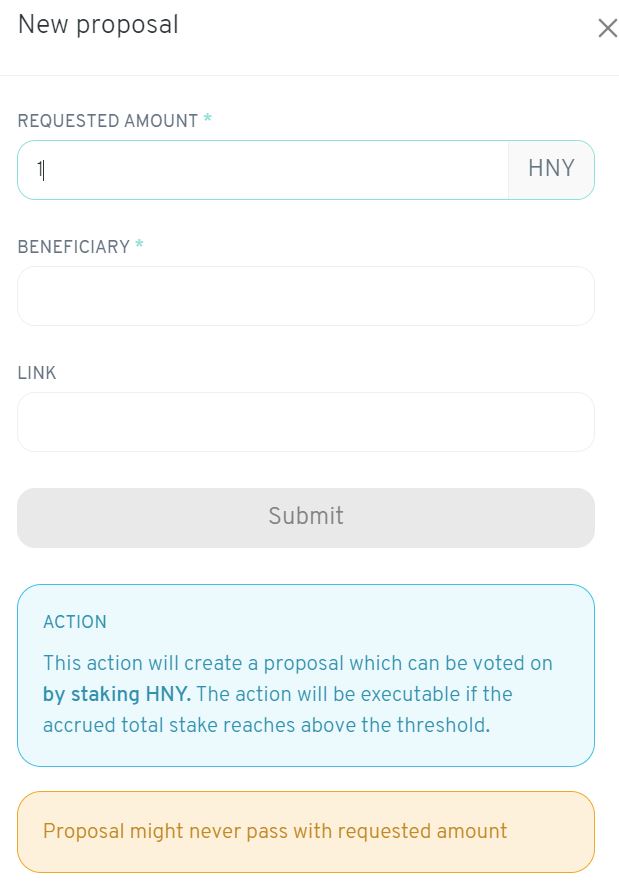 It would be very easy to implement (we already have the tollgate app in the dao, and we should only connect it to the Conviction Voting’s ADD_PROPOSAL_ROLE). I propose to wait and see how people reacts to the required link, and if we have spam, then maybe use it.

and we could even add the functionality (or is it there?) that the proposal ‘stake’ amount only gets 100% refunded if the proposal passes.

You can recover all your stake at any moment when you are supporting a proposal. I think it’s important to guarantee that in order to have a large vote turnout.

The PR has already been merged, but it’s a good suggestion to change the field name to “Description link” or something similar. We may add it in a future version.

This is because Conviction Voting has been closed during the last 2 weeks. The message will show the threshold when it will be open again.

You can recover all your stake at any moment when you are supporting a proposal. I think it’s important to guarantee that in order to have a large vote turnout.