Currently the Spending Limit at 1Hive is set to 10%, which makes it prohibitively difficult to pass a proposal starting at around 8% of the Common Pool requested (~$20k at the current price of HNY). At that funding amount, 62% of all active HNY would need to support a funding proposal for it to pass.

I’m going to try to cover everything that we should expect to happen if we double the Spending Limit without changing the other CV parameters, effectively doubling the amount of HNY that can be spent in a funding proposal:

First lets define things NOT affected by this change:

^ these are objective, however there a couple other subjective things that also should NOT be affected by increasing Spending Limit, when you consider the culture of 1Hive and proposal precedence: 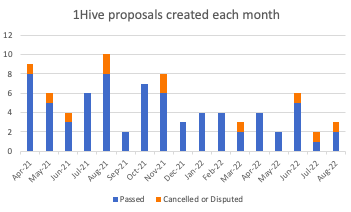 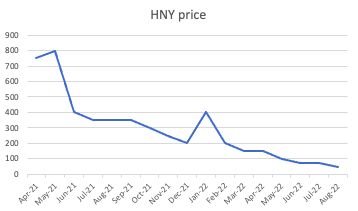 Things we can expect to change from increasing the Spending Limit.

This is the 1 objective change that increasing Spending Limit causes. Subjectively, this should have several effects on the 1Hive economy, which will happen in this order:

So, why increase the Spending Limit?

There are 2 key reasons that I believe a spending limit increase will help the 1Hive economy:

There has already been a lot of discussion about this on the discord, so will just add my quick thoughts here…

In the past I have argued for minimizing governance of parameters, trying to find a set of values that work and then avoid changing them so that the system behaves consistently and predictably over time. However, it seems clear to me now that parameters must be adjusted to based on different market environments and stages of 1Hives growth.

As @paul points out, as the price of Honey has dropped during the Bear market it has increased size of proposals in terms of Honey in order to attract and retain contributors. As proposal size increases, the threshold to pass a proposal increases, and effectively limits the maximum proposal size. This effect is part of the design of conviction voting intended to encourage proposals to tend to stick within a desirable size range (not too big, not too small), however, with the current parameters along with the declining price, the average proposal size feels like it is to low. Therefore I support the proposed doubling of the “spending limit” as an initial step to addressing that issue.

I suspect that it makes sense for us to also adjust other parameters over time, and perhaps we can establish a quarterly review of parameters and make proposals to adjust periodically based on how things are trending.