Current changes to the 1Hive discord server, and some ideas.

Current changes to the 1Hive Discord server and some ideas

It has come to our attention that the huge influx of users has caused the 1hive discord server to be rather chaotic and unorganized. This is noticeable from repetitive questions being asked in the wrong channels, to bot commands being used outside of the bot-commands channel. Please note that everything is still subject to change, based on feedback. This is still a work in progress.

Motivation
An improved structure will lead to a clear, concise, and clutter-free Discord server, allowing for improved user experience; Information will be easier to find, which will lead to new users being able to achieve their goal quicker. Channels will be used as intended, and bot commands will not be issued all over the place. The goal is to continuously moderate the channels, and stay open to changes if the community wishes so.

:
Members with the Verified role will have no special privileges other than access to some channels that are otherwise hidden, such as the channels part of the Bees section. (More on that below)

A new role has been created known as the

we are currently experimenting with a new trusted role Bee. This role is given to users who have contributed to 1Hive. In the future this role might possibly mint more cred than the regular Verified role. Either 0.75x or 1x. Still to be discussed.

The Keeper role is assigned to users who hold at least 1 Honey (HNY) in their accounts. Having a Keeper role unlocks the Keeper channel.

Self assignable roles have been added for access to the Swarms channels. Through the

#welcome channel, users are able to choose which swarm they want to join; This is done by reacting to the emoji related to the swarm. This should not be confused with the channels found in the Bees channels. The purpose of the Swarms channels is for contributors to discuss.

Changes to the structure

The most important structural changes will be outlined in this section.

Information channels
The default channels are pretty straight forward and don’t change much. Our main idea here is to create a sort of channel hierarchy to prevent noise in the channels further down in the list, that are more topic-specific.

Open channels
The #intros channel has been removed, as we want to engage users more into discourse, and have them introduce themselves on there. Furthermore, the use of a welcome message for each newly joined user was redundant.

Bees channels
Note: requires no self assigning, and is open to all members that are Verified

Swarm channels
As mentioned before: This should not be confused with the channels found in the Bees channels. The purpose of the Swarms channels is for contributors to discuss. Right now these are limited to the following roles:

(⏣) indicating that this is a contributor channel

#keepers. Users with the Keeper role can discuss in this channel.

This is it for now, feedback is always welcome

Some suggestions were made in this thread: Suggestions for the 1Hive Discord

Great, those are wonderful improvements, and so quickly after my proposals earlier today

I will check them and will let you know any additional ideas if any.

@onbjerg, how do I join the Fauna team?

ps: it would be good to have a condensed version of this post as a pinned message in the main channels, it will save a lot of redundant questions.

We havent really discussed yet how we will assign the Fauna role for members. For now we are keeping a close look on how everyone is contributing in the server

Thanks for putting this together @Rayne. One question, the bee channels are open to all members who are ‘Verified’. Does this mean BrightID verified? Was able to get into #gardens, #tulips, #flora, #celeste, #buzz channels by following the instructions on the welcome thread (clicking channel emojis). However, I can’t seem to figure out how to get into the other channels such as #pollen, #dev, #design, etc. Are those actually keeper channels (1 HNY required)?

@s_ben You need to be Bright ID verified and additionally need to !verify yourself for the discord server by typing that command in the #bot channel (though I think it works in the other top channels as well). 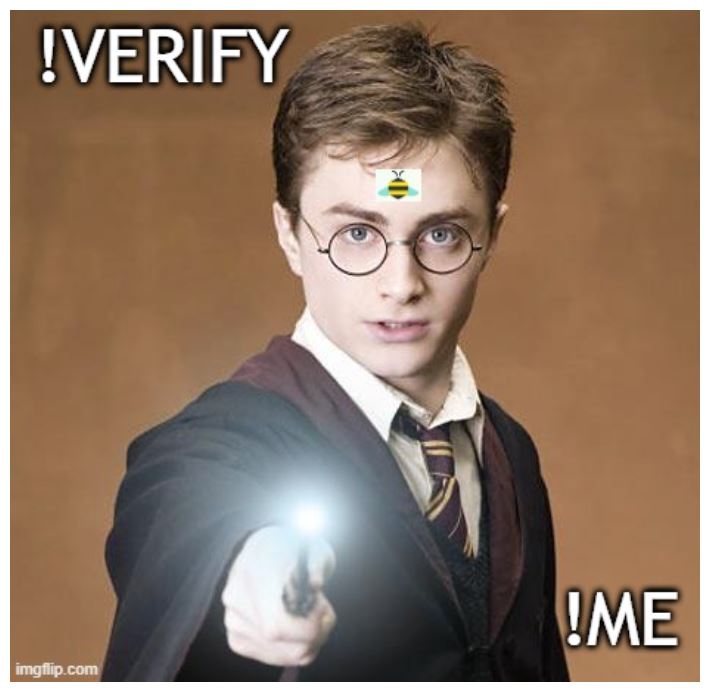 It works better if you wave a wand at the screen at the same time.

Hey Seth, this does indeed mean it requires brightid verification. If this is too much of a hassle give us (perhaps @lkngtn or @befitsandpiper) a shout on discord and we can work something out.

Thanks for the follow-up @Harry, @Jasper. Was able to get in. Documented the confusion I had on discord in case it helps

hey @Harry, got in! Was confused before, as I was already BrightID verified and connected to 1Hive. was busy so just skimmed the bot instructions and gave up, thinking it was a problem on the backend. went through the process again this morning, read all the way through the steps, realized there were additional steps (scanning the code, typing !me), did them and it worked. can now see #pollen, #dev, etc.

@s_ben Thanks for highlighting something I wanted to point out that is still not really clear (as exhibited by your comments) to everyone.

In the loosest sense I think the term ‘verify’ or ‘verified’ without some other descriptor delineating differences between:

I think the biggest confusion and issues that crop up in these is the order with which they are done because different things happen if one isn’t BrightID verified first for most of these.

Example: Someone will connect their wallet with faucet and not be BrightID verified will see a message there along the lines of ‘waiting to be verfied’ which I have not checked but should say "waiting for you to be BrightID verified’ and will NOT allow the user to connect to the faucet. Now if someone was already BrightID verfied the faucet will just give them a BrightID QR code so they then get the 1Hive App connected to BrightID and can then access the faucet. The user confirmation of this step is either by seeing faucet button and/or a 1Hive app icon in their BrightID app or not.

Right now off the top of my head I do not have a set of terms to define these nicely.

I do know when we ever say ‘verified’ and mean ‘BrightID verified’ we should say that.
I also think we need to talk about confirmation. So when a user gets verified in some way they should be able to get a ‘confirmation’ they are verified for something. So if I was going to use a bot to do some of these functions I might have.

etc.
The general
!confirm command without parameters could give a general report of everything, BrightID, faucet, discord, discourse, github, pollen

I am not married to any of the names/details here other than the terms should be pretty clear and well delineate between the differences. Also if the role is NOT verified there should be a link to help on how to become verified and to confirm this.

Excellent. Also be aware that many people that just come in the discord server and see 5 others type !verify or !join, often they will blindly copy it and do the same.

for understand what is it talking about and how they can help and participate ?

Read the message in the welcome channel, this information is already given.

Something I notice , the name of the channels are miss leading sometimes . like the names in them self does not explain what they are .

Example ~ On boarding ~ you must know alot things before you know what for ~ .

Also general and honey ~ what different about them . I mean a bit not clear …

i’m new here discovering this promising “startup”, still asking is it serious or rather game play for children?!? Please tell me:
1/ That complex, confusing, unclear verification/approval process - is it intended to be difficult for new users to get in? Should users show enough effort to get qualified “bee”?
— if so, wouldn’t it be better to prove users through exams of project, forum&discord rules etc? Process which educates them and increases the knowledge of all?
2/ If this is not intended, then there is a huge lack of structure and clear information and clarification. And this applies in any case.
— I got verified, but i still don’t know why that was so important? Why BrightID, what is the value of that? Why click&paste in discord and studying and searching and finally know nothing why i need to do so? Eg. many links invites “join our discord”, when i joined, i was not able to write in any channel - ???

Can you leave an answer on these lines please?

(I understand, this all could be under construction - in such case i can help maybe…)

Hi, there is lots of documentation on all of this, especially on discord. To use honeyswap you don’t need to be verified, you only need to be verified if you want to use the faucet. Please refer to the information in the #welcome channel in discord to guide you further.

Hi Jasper,
thank you for your guide. I realize, that i did not read everything 100 % carefully.
But thats just what i’m pointing out. I read and spend quite lot of time and finaly, bored of a lot of unstructured (or unusually structured) information, i didn’t catch some important basics.

Eg. I use to look for FAQ and Support page when new. But FAQ here
is not FAQ at all. This is only one of many examples.

Yes you are correct and we are well aware of this. The project has grown enormously past weeks and some aspects are still catching up.

We are restructuring everything at the moment, to make it clearer and to remove redundancy. Any input is welcome, so if you have any specific ideas, let us know.

This is a community project and the community = us

I would be delighted to offer some improvement ideas. However, i need to discover thoroughly this site first before i can say anything helpful. Thank you for your reaction