This proposal is to support the

Our goal is to make it easy for communities to launch microeconomies on xDai that utilize HNY for disputes (via Celeste) and create arbitrage opportunities on HoneySwap. We call these microeconomies Commons, as they are very much inspired by the Commons Stack.

Commons are initially funded by a Trusted Seed via a Hatch. This initializes a Dandelion Voting DAO (Hatch DAO), that upgrades to a Commons. The Commons has an Augmented Bonding Curve (ABC) for token issuance, manages funds via disputable Conviction Voting (dCV), and is governed by disputable Voting (dV).

Bootstrapping the Gardens Swarm DAO Proposal Information The Gardens Template is an incredibly powerful DAO setup. It consists of a Token Bonding Curve issuance policy that integrates various funding streams to feed a Conviction Voting DAO. It has the potential to enable a plethora of economic designs that were never possible before. Imagine if DXdao and 1hive were smashed together in a repeatable template that could reshape the stewardship of shared resources as we know it. The Commons Stack h…

Our original funding request was done under the name “Gardens Swarm” and was for 50 HNY which at the time was ~$50,000 USD. The price of HNY dropped, and as HNY maximalists

, we held all the way down and had to request more funding here.

Continued progress on the Gardens Swarm Proposal Information Background, Overview and Proposal Rationale We are building the first implementation of the Commons Stack’s Commons Model, a DAO initially funded by a Trusted Seed (Hatch), later powered by an Augmented Bonding Curve (ABC), whose funds are managed with Conviction Voting (CV), and governed with Dandelion Voting (DV). See our previous successful funding request Proposal description: This proposal is to support the Gardens Swarm team…

During the proposal review process, we were asked to engage more with the 1hive community (for which we hired Chuy to support us in that effort) and to differentiate the two flavors of Gardens.

The original idea of Gardens was following the Commons Stack model, a bonding curve feeding into a Conviction Voting DAO. Gardens implemented a new flavor (that 1hive uses in production) that has a direct issuance model replacing the bonding curve. For over a year there were simply 2 flavors of Gardens, but in an effort to better differentiate the two flavors, the flavor with a bonding curve will simply be refered to as a Commons as opposed to a Gardens.

Our Swarm intends to prioritize the maintenance of Commons, while working closely with the Swarms supporting Gardens in maintaing the shared codebase.

Commons Swarm is one of several work streams building the first iteration of the future of Public Goods funding. After our first user, the TEC, launches we expect to utilize the TEC as a funding source.

Rodrigo, Fabri, and Will are 1hive seed members that are working on

Gardens and are advising the project.

How Funds Will Be Used

This HNY will pay devs a rate of 25-50 xDAI an hour. As the project evolves more individual agreements might need to be made (Bounties for tasks, etc) but the hourly rate will stay around 25-50 xDAI/hr (based on experience) for the foreseeable future.

Honey is Money (but it’s not a great unit of account) All payments will happen in HNY, but based on the exchange rate of the date that the vote to pay out is made.

We have open accounting and you can see exactly how payments are handled and what everyone did to deserve them.

Can you add a link to the proposal in the DAO so I can support it, I didn’t see it when sorting by new.

We wanted to leave a bit of time for people to comment, do questions and provide feedback, but here is the link for those who want to support the proposal

As always, we welcome community feedback to improve the proposal. We are happy for the feedback we received in our previous funding proposal because it made us improve the way we work and communicate, and we will continue incorporating as much voices withing the community as we can.

Roughly how long is the $40k likely to last? To prevent what happened before I’d suggest either you sell it upon receipt or more ideally split this into 2 or more proposals to mitigate risk of price fluctuations.

Roughly how long is the $40k likely to last?

It should cover the cost of launching the Hatch for TEC in March, migrate the DAO to a Commons in April, and support the community until the end of May.

Until now we have been spending an average of ~$1k/week to reward contributors in HNY per worked hour, but it doesn’t represent the actual cost of the work done in the swarm. When the HNY price dip happened, we decided to reward part of the hours of some contributors in TEC impact hours to extend HNY budget a bit. Here is the average cost per week over all the payments made by the DAO: 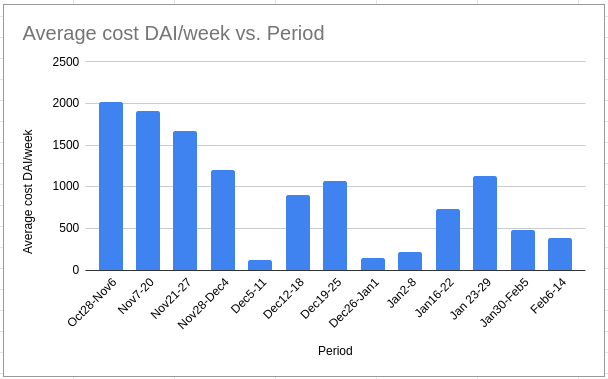 I estimate that this time we will be spending ~$2-3k/week since:

So I estimate that we will be spending half of the budget on releasing and launching the Hatch (February and March), and the other half on adapting Disputable Gardens to build a Disputable Commons (launching it on April and improving it’s front-end on May). I think $40k should be enough for three months and a half (mid February to May), finishing the launch of TEC, and providing a bit of support to the community after that.

To prevent what happened before I’d suggest either you sell it upon receipt or more ideally split this into 2 or more proposals to mitigate risk of price fluctuations.

I agree that it’s risky to keep the treasury in HNY, but we want to reward our contributors in it. Honey gets sticky when it’s in the fingers, and I think many people prefer to keep it (I don’t have any data to back it up, unfortunately, but I have heard it from many people in the community). Selling upon receipt to avoid price fluctuations would increase the price fluctuations (dropping the price 8% if we sell 65 HNY all at once), and we don’t want to do that.

As you are suggesting, splitting up in many proposals requesting smaller amounts would also be an option. Right now we are still up for absorbing the risk of a price dip by reducing our payments if necessary (as we already have done previously), since it is unlikely that we will face a dip as devastating as the previous one (reducing ~80% our funding). Moreover, since we are requesting an amount of funds comparable to other swarms (quests 60 HNY / $18k; buzz 73.58 HNY / $22k; celeste 120 HNY / $30k), so I don’t see a reason to split it up in different requests, we are all taking a similar risk. However, we may consider this option in the future.

I hope my replies make sense to you.

If this means that if the price drops substantially you won’t make more proposals to finish the project then great. However, if it means you will ultimately request more if the price drops eg like this situation, then this will cost 1Hive more in the long run so I would suggest again breaking it up into multiple proposals.

With regards to comparing the amount requested to other swarms, although I believe there is value in the Commons Swarm development, I’d like to reiterate that it doesn’t directly benefit 1Hive like the other Swarms you have suggested, it is more of an ecosystem support project, so it’s not as directly comparable in my opinion.

Yes, we are responsible for what we propose and we are going to finish no matter what happens with the price of honey. We already did a good job in our first proposal, in which we managed the funds as diligently and transparently as possible, and presented a detailed report explaining the different areas in which we were working on. From now on we are also going to pay more attention to communication and stay in touch with the buzz swarm. For that, @chuygarcia92 is writing weekly recaps and we are going to have some AMA events.

So we are not going to request more funds to finish the current proposal, but that doesn’t mean that in the future we may do new proposals as Commons Swarm to keep improving the conviction voting ecosystem, and the 1hive community will evaluate and decide to fund them or not. Of course we are only going to request funds if we think that our proposals have sense for 1hive, and we already explained why we think they have. Ultimately it will be decision of the community if they find value in what we do or not.

The proposal has passed! Thank you all the supporters that have made it possible, really.

We are preparing something and you will hear news from the Commons Swarm very soon, I promise!

As promised, you heart from us soon enough! We conducted an AMA that can be re-watched here! 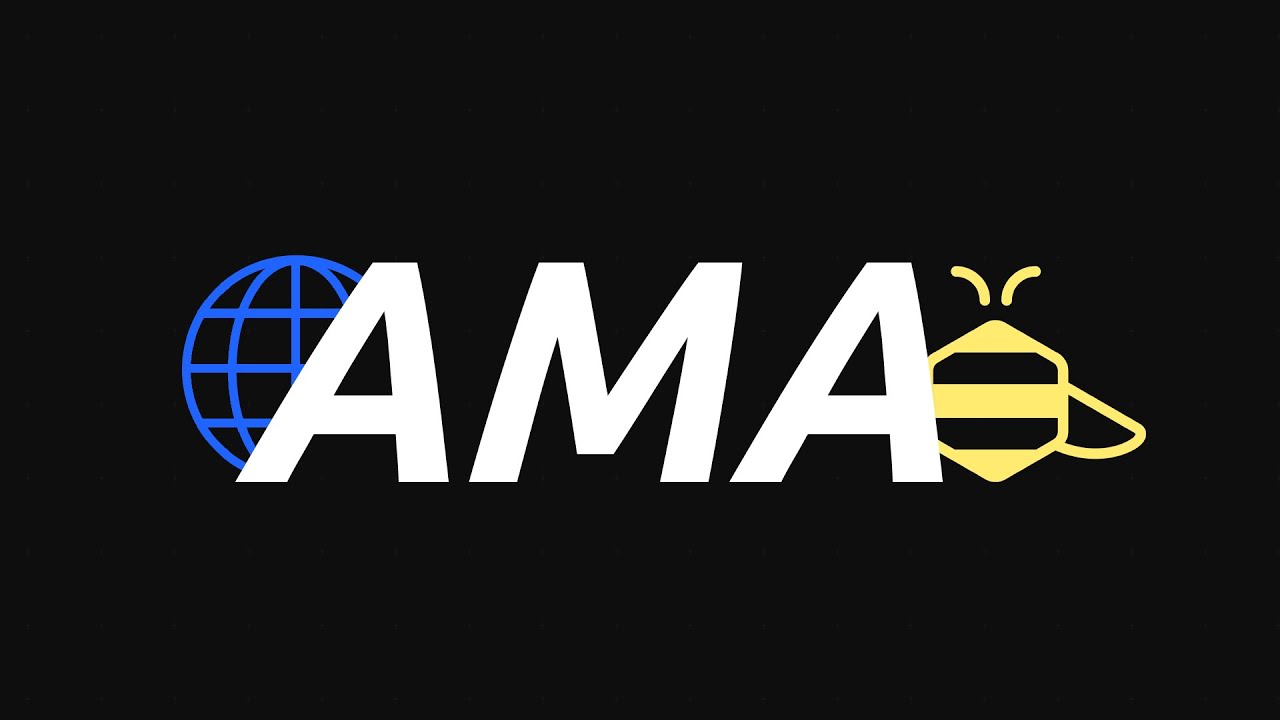 On top of that, @ygg_anderson has written a technical overview of the state of Commons Swarm progress and it’s most imminent roadmap in the TECommons forum. 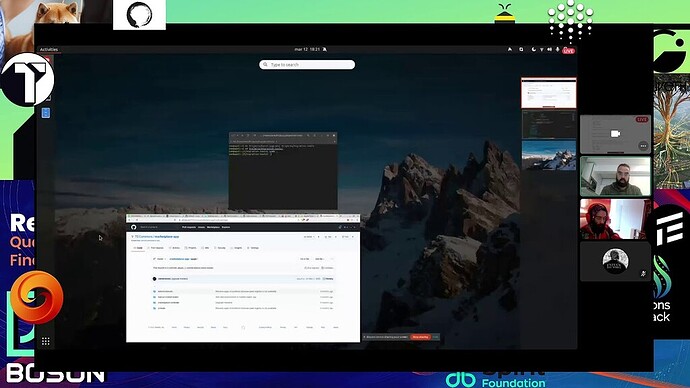 State of the Hatch and Beyond

State of the Hatch and Beyond This forum post is a summary of the hatch sync between Sem and YGG that happened on March 12th 2020. The sync is recorded and is a great supplement to this summary: SEM REVEALS ALL 🔮🔮🔮 First off, make sure...

This proposal went a long way and now we are up for showing the outcomes of it.

We continually released our updates in a weekly / bi-weekly period, although we think its more interesting to read the articles of what have been the three most important projects we have been working on:

The work of the Commons Swarm reaches to an end. We hope the seeds we planted with these developments germinate and the whole community gets the benefits of their fruits!