A new proposal, requesting 90HNY from the Common Pool, has recently passed.
Otherwise business as usual.

The Garden Swarm had his first Sprint Planning to start the development of the Gardens initiative. There are several community members involved and a lot of excitement to share the 1hive DAO design with other communities. We are preparing a proposal to share with the community with a detailed explanation of our current vision, roadmap and initial contributors.

On March 12th the commons Swarm organized a Community AMA on Youtube.

How does it work?

Here is the current rotation :

How we check the Stats for Discord Help channels: 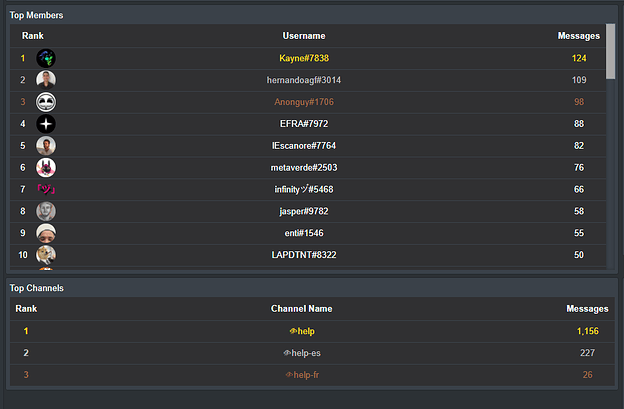 To make sure the support team is helping, the facilitator, after running the stats, looks at the channels and checks every conversation. The idea is to reward members of the swarm and other people helping.

A new Morphosis Course is about to start, and it will be focused on an Ethereum Developer Course; It will be led by @gabi. The format of the course will be async lectures with working groups to address the tasks of the week.

We schedule a call on Saturday 20th at 17:00 UTC to form Working Groups. The first lecture will be shared next Monday and the first shared meeting will be held on Wednesday 24th at 19:00 UTC.

We’ve finally released QA environments for the community to test:

And a synchronous QA party has been organised to test the whole flow with anyone who’s interested. Testing is going well, we should hopefully be able to upgrade the current protocol with Celeste integrated in 2-3 weeks. We have decided to use an older logo design. We have also created votes for migrating the Honey token controller and the majority of the common pool funds to the new 1Hive Protocol.

The Terra Swarm has recently made a new funding proposal in order to translate the upcoming Agave Wiki, the Monthly Recap and the coming Medium Articles.

This month, Terra kept onboarding members from multiple languages. Terra also finished the translation of the wiki to French.

Terra plans for the next month:

Agave ($AGVE) launched on February 28th, bringing a new wave of interest and members to the 1Hive community.

Early contributors of the 1Hive community received an initial portion of AGVE tokens, according to a number of parameters prior to a snapshot which took place on January 25th. The Agave Contributor Distribution Announcement was published on February 21st.

During the token launch, a mistake in the AGVE/HNY liquidity pool was made: the intended ratio of 50HNY/10,000 AGVE ratio was set at 50HNY/1000AGVE. This created a chain of events which caused extreme volatility; the team pulled the liquidity off and reinserted it in another pool (AGVE-WETH) at the proper ratio. Some users may have occurred in some losses, while others may have benefited from this. The team has since then worked hard to compensate users, and proposed a compensation which is outlined in this post. The community is currently voting for this compensation to take place. First Agave Votes are Live

The launch of the Agave platform is scheduled between the end of March and the beginning of April, and a new landing platform has been created. (Agave.finance)

Finally, a new Wiki Page is under construction and a new Telegram Group has been created.

For further questions, a dedicated FAQ page has been created on the 1Hive Wiki Page

A new proposal from the Buzz Swarm passed on March 16th. The requested amount of 55HNY will be used for numerous activities presented in the forum post Buzz Dao Proposal #3.

More incentives for community members to get involved

Using the analytics built out on our pages

The team is still working on the contract side of the project, it’s almost done.
The frontend of the site is a WIP you can access it here : (https://honeyquests.vercel.app/#/home).

Tulip is working on developing a new honeycomb interface, with a sustainable farming program that will involve a new token to reward providers of liquidity on Honeyswap. Progress is underway and we expect to have a product to test net in the next 1-2 weeks. Expected release of the new honeycomb interface, with wallet integration and sustainable farming expected to release in the next 3-4 weeks.

IMPORTANT: Minerva will get its own MIVA SuperToken.

The first distribution will be via a streaming airdrop or airstream

Everything is focusing on the Google Play Store Listing and therefore quite some work is done on fixing bugs, which came up during testing.

Right after the Agave Token Launch, the first collaboration between 1Hive and Shenanigan took place. Members of the 2 communities can stake HNY and PRTCLE on the website https://www.dripp.farm/ in order to claim Alvin and Shweatpants. Alvin is an ERC20 that is exchangeable (in whole number quantities) for a limited edition plushie of the agave logo character (named Alvin) and an NFT - Non Fungible Token. Inspired by the success obtained by Unisocks (worth over 100k at the time of writing), it’s the first collaboration (Cross-Pollination) between 1Hive and Shenanigan. Total Supply: 100

Staking of the 2 assets is live until April 4th. 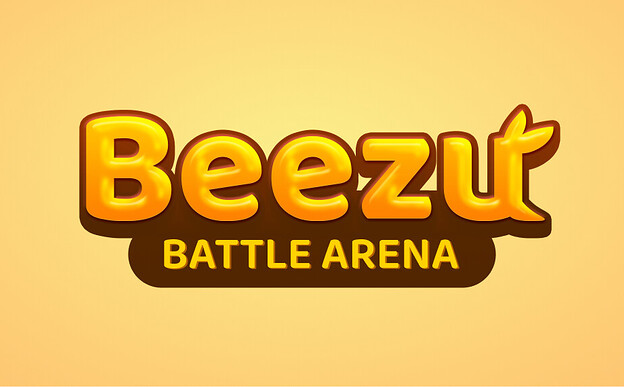 The team made some progress, regarding the story,game mechanics,design and smart contracts

The most notable progress is made on :

the game prototype for which we can share some screenshots : 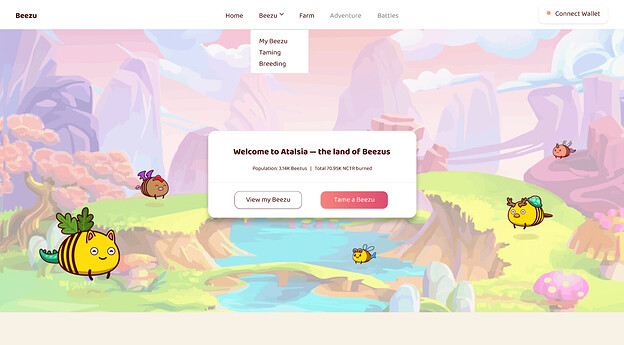 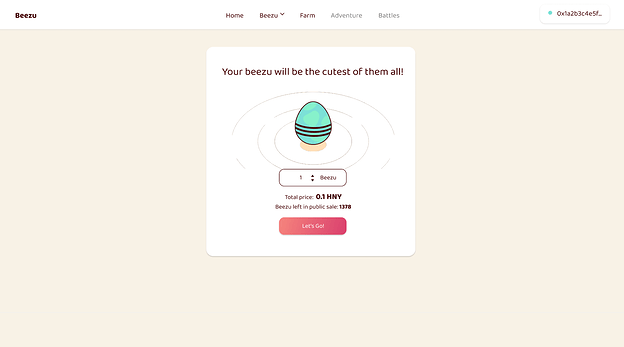 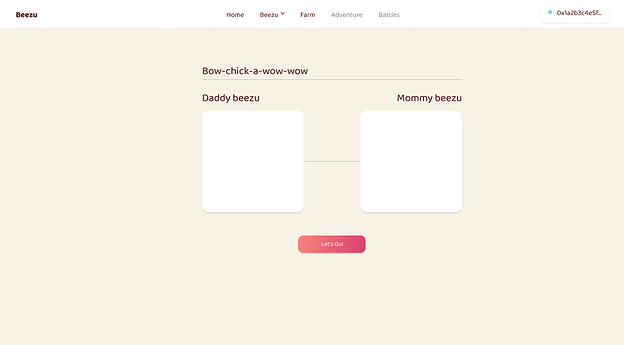 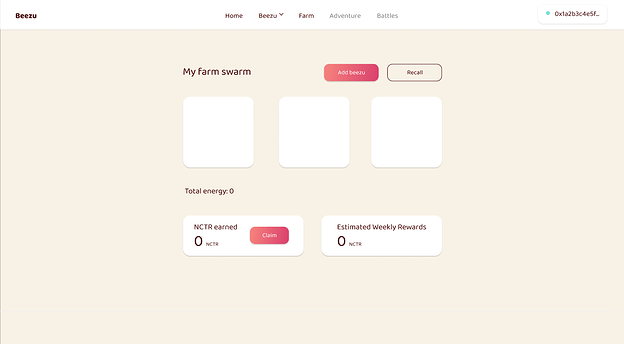 The game mechanics, story and Wiki : 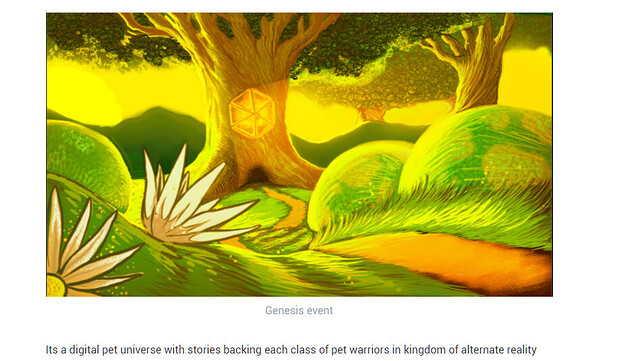 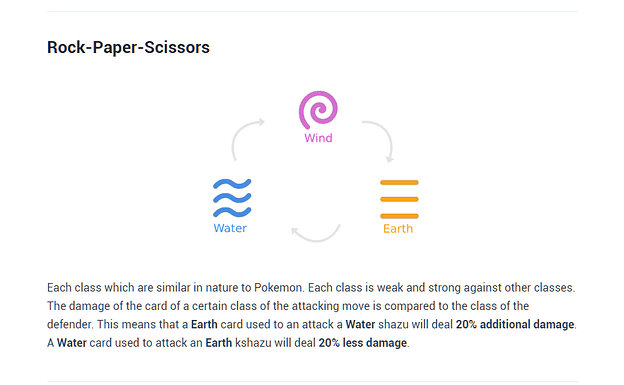 ■ Auction and Sale Contract completed and testing on progress 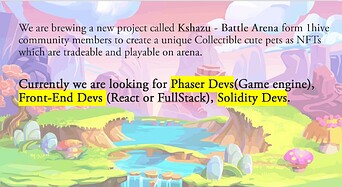 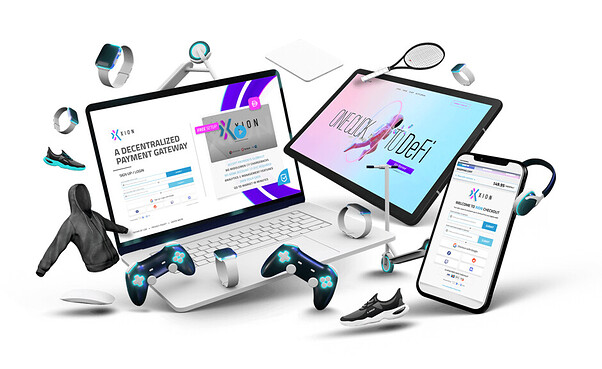 The last month was also interesting because of the few new projects adding liquidity on Honeyswap, one of the most exciting ones was Xion Global. With their DeFi yield farm and cross-chain dapp on https://xion.finance and with their airdrops worth around $40,000 of $XGT tokens for many addresses that were holding some tokens on xDai and Honeyswap.

The airdrops of XGT were sent in 3 batches and those that got them were :

Xion has been working on the DeFi dapp for the past 5 months whereby they connected the Compound lending protocol for earning interest on the ETH mainnet with DAI and then yield farming XGT on the xDAI chain with xDAI. Xion added meta txs for earning interest with DAI, for users to pay their gas with DAI instead of ETH. And a bunch of other things like vesting contracts, XGT generation contract, security mechanisms, KMS AWS, gnosis for multi-sig, farming NFTs on the xDAI chain and generating XGT on different pools.

They started off with an xDAI pool on xion.finance based off Uniswap’s contracts with some additional functionality here and there. They eventually noticed that they weren’t getting as much traction and decided to open a new xDAI-XGT pool on Honeyswap since they are firm believers of xDAI.

Since they opened that pool on Honeyswap, they immediately received a vast amount of liquidity providers(micro-farmers) and thus formed strong collaborations with 1hive, xDAI and other partners on the xDAI chain.

Before the DeFi dapp, Xion has been busy building the e-commerce payment gateway for the past two years. Beta tested it with over $10k in txs(DAI through sendwyre) from general consumers purchasing their merchants products and finally got it to a conversion friendly state. Xion decided to hold off on marketing it out, since they saw how a decentralized finance aspect using XGT as a method of payment/rewards token would bring the e-commerce/DeFi ecosystem to life.

Now Xion Global is busy finishing their own custom indexing tool to decrease contract calls for increased speed and efficiency, whilst connecting the e-commerce dapps for their DeFi dapp to really bring the XGT use case into play. Just imagine you’ll be able to purchase a PS5 with XGT or even NFTs offered by our merchants, alongside a 100% cashback and compounded subscription discounts in XGT. What’s more, any Xion merchants will also be able to easily and automatically reinvest their sales revenue(xDAI) into up and coming lending protocols.

Introduce Yourself to 1Hive Thread

[CELESTE] Explanation and details of what will happen with the branding

Great work @boring877, this was a longer one since it’s a monthly format now.

We may include and cover even more swarms and friendly projects in future like Rare, CTC, UNCX etc. It just takes a lot of time and effort to gather updates for every project that is on Honeyswap right now and friendly to 1hive. I feel we may need to publish this and translate for Medium.com and other crypto blogging platforms, simply there is so much going on right now and this helps everyone to catch up.

Just my opinion, but maybe I would not add non-1Hive projects to the 1Hive monthly recap, unless it’s a cross-pollination (like with Shenanigan); This maybe be mainly focused on things within the 1Hive ecosystem.
We could however, create a short recap of the xDai ecosystem, if necessary (not sure about that)

But, there’s so much going on that adding every other project may become an endless work, and very long to read too, since hopefully many more projects will jump on the xdai network as time goes by.

This has been a really great read for me. I just got the best recap and sneak peak at all the upcoming projects in the one post. Great job @boring877 and others that helped. I can imagine the kind of effort it takes to put together a quality and comprehensive post like this. Thanks!

Really a wonderful month, thank you very much to the 1Hive team !! I’m sure the success will continue.

Guys are killing it, great work to all, and I personally like to hear about other projects that the Hive gives blessings on.

Thanks @boring877 for the recap

Amazing, thank you boring for making this thing possible

Thanks for the recap @boring877. Its a huge task to keep up with everything that’s going on with the Hive these days.
If i may suggest, why not a weekly or at most a Bi-weekly recap. There is so much to take in with the monthly and a great percentage of the info by the time you put them out might no longer be that current.

It’s harder if we do it weekly, because we literally have to ask every swarm and check if our information written in the recap is well done. We discussed with @boring877 that the monthly format makes more sense and gives us more time to organise and also the swarms will have more substantial information and development done in 1 month.

I must thank you very much for your efforts.