idea by @erminio and @ComandoBurrito

Me and @erminio have been putting efforts these last weeks to build a Minecraft Server for 1Hive during the MetaFest. Since metafest ended, we have been exploring and learning a lot more than we already knew about how and what a minecraft server could be by implementing blockchain assets to it. We finally decided it was time to start talking about it, since Enjin and Jumpnet are just around the corner.

So let’s just start by talking about the server and then about the Blockchain implementation.

As I said previously, we have devised and built a functional server with different modalities. For now, only the following modalities are being developed:

This is the place where bees will spawn when they login; here we want to achieve an interactive and informative start space for newbees. We could add rooms dedicated to 1hive information, some rooms dedicated to each of the swarms and/or projects from 1hive, each with the purpose of inform newbees. 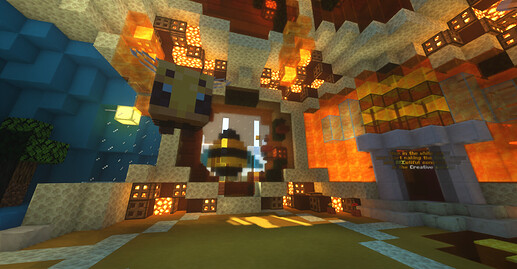 Maybe add some exploration guide for the tiny island with the help of an npc like the Helper Bee and in it, this process of familiarization with the 1hive and blockchain concepts. 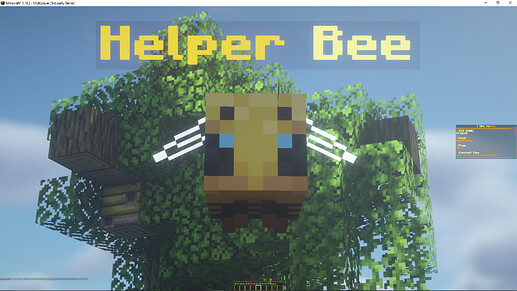 This could be a perfect space for bees to socialize and learn, besides the obvious gaming approach of a minecraft server, we could use this virtual space to even bring exposure to other projects from other DAOs related to 1Hive. 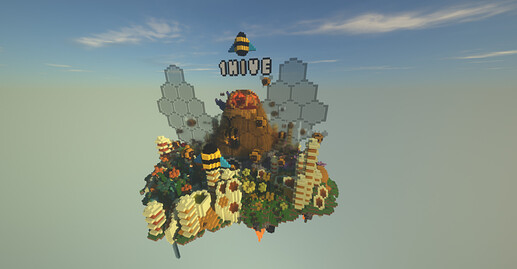 Looking similar to cryptovoxels, this is a place for recreational and fun constructions in minecraft; each player is assigned with a plot and they can build whatever they want in it. 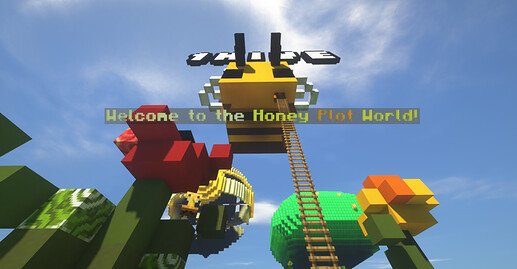 We plan on introducing a voting system where bees can vote for the plot they find most beeutiful or interesting , and maybe every week catalog the most voted plots and maybe reward the most voted one, also organizing some special events or building tournaments. 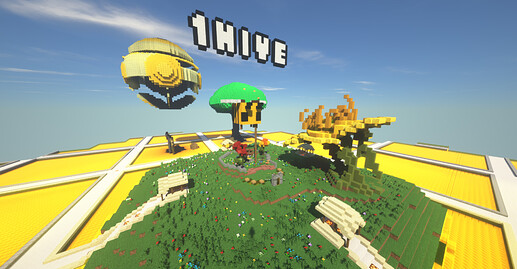 Also with the implementation of NFTs to minecraft, we could sell extra plots as a limited NFT, and maybe even the player could sell the ownership of his/her plot also as a NFT. 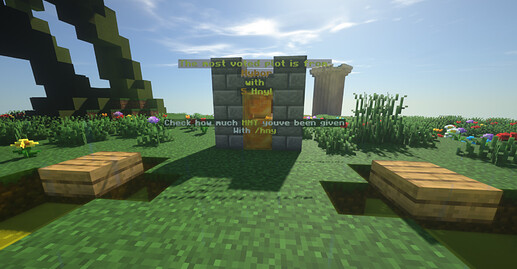 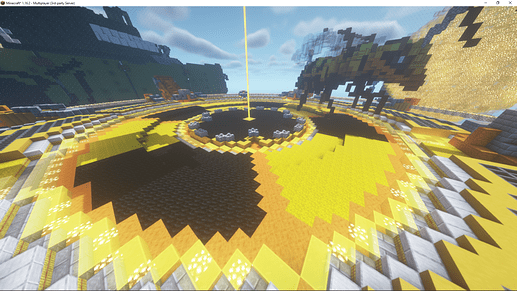 A server were pvp minigames will be hosted where we plan on adding at least one more well thought original pvp minigame and one more classic minecraft pvp minigames, besides the one its currently functioning.

We thought these could be: 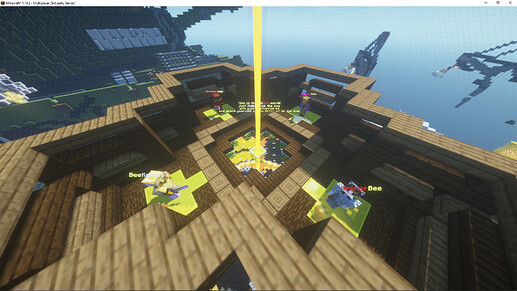 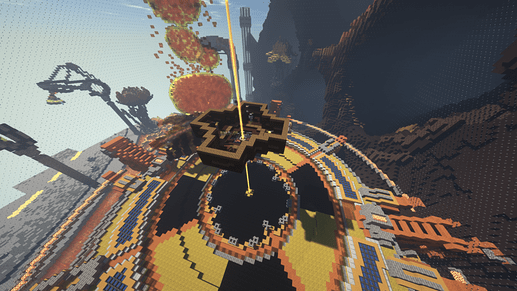 A Minecraft Survival with RPG adventure elements where the most adventurous bees will explore and survive in the vast world presented. Players will spawn as a newborn Bee, introducing themselves to the One and only hive, a Hive just established in the lands.

This small town of bees was forced into swarming season due to their last hive being destroyed by an unknown force. 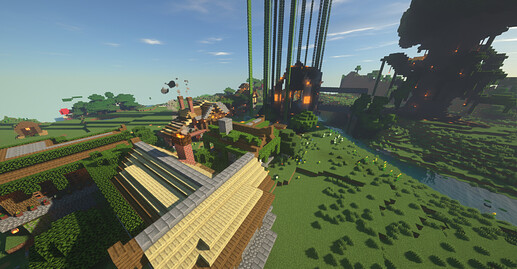 The town will run with its own currency system (honey) and this will be used as a reward for completing quests, and also as the currency used by the NPCs of the Hive town to sell items (this items could be literal NFTs made by the community), or buy plots in the town. (A place to live as part of the establishment).

Players will be able to sell their goods for honey to the NPC which, according to its trait, finds those items convenient to buy. For example, Bees can sell their iron to “Raul, the blacksmith bee” for a determined amount of honey; this being another way players can earn honey by playing. 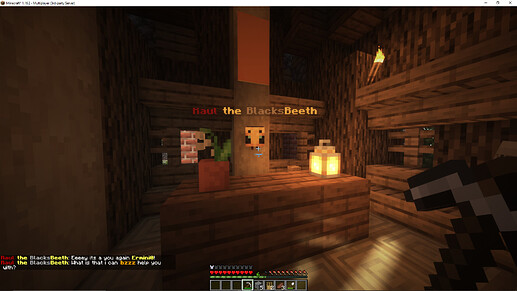 This honey wouldn’t be the same token 1hive community uses, but instead a currency within the game, it could possibly be linked to real HNY through another real cryptocurrency and make it a Play-to-Earn (P2E) type of mechanism. We still need help to conceptualize this and then create it to work by linking the wallets to the game with a similar plugin to Enjincraft (a fork in this case).

Possible name for this map: 1nce Upon a Hive 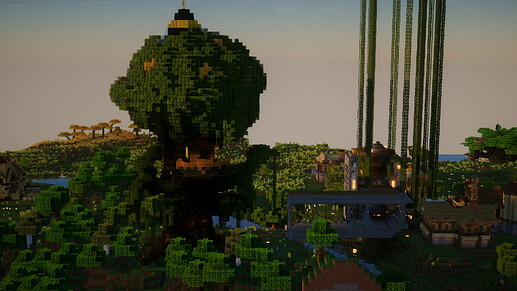 There is currently no link between xDai and Jumpnet, however these two networks share the same objective: low-cost fees. Enjin has demonstrated the ease with which nft and normal tokens can be created and transferred.

Maintenance Costs:
For the server to function optimally it is necessary to obtain at least 3 servers to configure what is known as “BungeeCord server”. This allows us to optimize servers with different modalities. Despite this, each of these games and modalities are still a work in progress and we honestly feel that much more effort can be put.

However, there is a plugin which connects to the cloud and goes through the official Enjin wallets. Unfortunately, the Enjin wallet is not directly linked to the xDai chain, the only way to achieve this is to develop a bridge between xDai and Jumpnet, or instead to fork the existing Enjin plugin for minecraft (which is open source) to another wallet with the same capabilities and which can also transfer the same types of assets.

But what benefit would something like this bring us?

As said before, we could use the server as a virtual space to host events of exposure and demonstration for let say projects from 1hive and other DAOs. It could also host, as done before, virtual music festivals and many other things, not to mention the possibility of setting up server governance, but that’s another topic for another day.

Another advantage is that we can start developing one of the first P2E (Play-to-earn) DAO servers, which at the same time will attract more people to 1Hive.

After making the server for Metafest, us being introduced into the 1hive and crypto community and being long-experienced minecraft players, we realized there’s a whole spectrum of possibilities on making a minecraft server powered by decentralized blockchain. Possibilities that we can explore and exploit in order to achieve another space where gaming and crypto can merge together in harmony.

Let us know what you guys honestly think about this idea, we would appreciate feedback of any kind. And if you are interested in carrying out this idea, please let us know as well, maybe we can make it happen with the help of this lovely community. 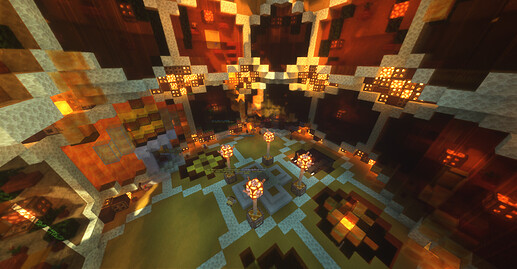 Well, really interesting, I am sure that he will have a very good receptivity in the community !!

I love this so much!!

So much fun, and lot of potential to explore with NFTs and other in-game economics that could be connected to 1hive in various ways.

Happy to support a proposal to cover maintenance and server enhancements/experimentations. Also would a #hivecraft channel in discord be useful?

This is the epic thing you guys are doing. I can not wait to be in game and play with our members of our DAO on that server and have some fun there. With all this things you mentioned above I don’t know what to say I am speechless just keep going with this and this will be the most epic server on Minecraft(crypto space).

Lots of work put into, nice.

Indeed NFTs as you said can have a lot of potential in a virtual environment like this, it’s all a matter of refining the system as we write the proposal we will continue to develop all these ideas. Thank you very much for all the support Luke

and of course, it would be great to have a discord channel dedicated to this project.

Something I didn’t mention is that there is even a plugin that allows us to interact directly with a discord server from the minecraft one. We have only tested it to read and write data logs (from minecraft to discord), but I only mention it because it would be an interaction that we (as a players) can also get a lot of benefit from it.

The advantage of the bedrock version is the accessibility, because it is also supported on Xbox, Playstation, Nintendo Switch, among others.

Of course it is possible to do so, however, doing so limits us too much in terms of customization and interactions with the server, especially with the plugins that make much of the above possible.

I have literally never played Minecraft, but if there is anything that would get me to play, THIS is it! I’m very impressed with the work you’ve put into this. Would def vote for a funding proposal.

Is there anything you need? What’s the next step you guys are working on? Can anyone access the world or is it not ready yet? I’ve never played Minecraft either so I don’t know how to join something like this but it would be cool to see some of the canon NFTs displayed here, a place were we could do some AMAs, and I am sure there are many more ideas as you listed some your self

This is awesome I too havent played much on minecraft but a recent idea was jumping in my mind too early to disclose but this is cool I think I need to dive to minecraft from my PS4 on this server.

I am thrilled on the concept of linking with XDAI and creating NFTs and using HNY to achieve all the game possibilities I will bookmark this for more updates.

I’m really interested in this project and wish it well, would love to help and think it would be a brilliant new evolution of 1hive.

Hey Hi!, We are currently in the making of a proposal for founding and detailing everything we need. But yeah, anyone whos willing to help and learn is welcome! Better yet if you have experience coding java and/or solidity. you can contact me on discord as Ermini0#7687 or comando burrito CMD Burrito#2759. The server is currently running, you can join with the ip address: minecraft.1hive.org
theres a tutorial i made on how to join the server in the arcade channel of 1hive, you can join and give us some feedback or any idea you can think of, it would be helpful!

My son is playing Minecraft, amazing map! I will tell him for that beautiful map

This is dope,!!! You are very talented and i can see when somebody is doing it with passion, you guys have some brilliant ideas around Minecraft and i would love to support you. The Possadelic event was great and this is the next level.

Keep up the good work !

Can you join on a mobile ?

this is awsome. wow . I have always loved Minecraft. You created a pristine work of art.

WoW such an idea, that will get a great participation from our community members I´m sure about that.