Stay at speed with everything related to 1Hive and make sure to support our communities by joining our social channels:

No updates from Terra Swarm for this month.

What a month this has been for Agave. Unfortunately, on March 15th, Agave and 100Finance, two lending markets on Gnosis chain, suffered a reentrancy attack and most of the funds were stolen by a malicious hacker. This has come to great surprise and honest disappointment for all of us, as it has been absolutely terrible to see community members, seeds and over 700 addresses involved in some kind of losses.

Read more about the exploit here.

However, the response of the community, the devs, and the GC DeFi ecosystem in general has been amazing. We have worked relentlessly to mitigate the situation, having multiple calls with different entities and working on a fast solution to restore our money market protocol. Without pointing fingers, the general understanding is that both protocols and network share a percentage of the fault, and therefore we have commonly worked on finding solutions to effectively help all our users.

After numerous calls, discussions, negotiations, we have a solid plan that intends to restore the money market, reimburse users (80% as soon as contracts are unpaused, after the Gnosis Hard Fork, and 20% in future installments), preserve and even ameliorate Agave’s figure in the Gnosis Chain DeFi ecosystem. Our community has been reacting very positively, our token price even increased after the hack and on April 1st we reached our all time high of +10000 $AGVE in staking.

The next steps for Agave are quite straightforward at this point. We want to publish our reimbursement proposal, redeploy Agave as soon as the hard fork takes place, add new money markets and strengthen our partnership with Gnosis and other important players in the GC world.

These weeks have been rough, but we are thankful of having such a brilliant and strong community.

No updates from Morphosis Swarm

For the month of march we had various activities that usually we are working on each month and also some new stuff that we started working on.

First thing is that we started to work on Onboarding ideas and completed the onboarding forms :
https://eu.jotform.com/220826380186053
These forms will give us some idea about the new members and the next step will be getting them on call and helping them understand 1Hive by sharing our knowledge. Depending on their skills and interests, they will be sent to message members of different swarms, for example : Gardens, Buzz,Tulip, Celeste etc.

We also brainstormed some reward systems we can use to incentivize them completing smaller tasks at beginning if they are without experience or sending them to the swarms that they are interested in, if they are more experienced to get on calls.

We also coworking together with Twells and syncing on 1Hive TV, it is important for us to be on the same page with all 1Hive swarms.

We also organized Gitcoin Memepalooza event , kudos to zer8 for this initiative it was good event and we got closer with Gitcoin DAO community and we did rewarded some Nfbeez from Buzz and NFbeez budget together.

Some other activities that are important to us were a meetup with Giveth communications to sync on writing articles about supporting public goods, informing about how 1Hive,Giveth and Gitcoin as well as some other DAOs are doing this. Mrtdlgc already wrote 1 article , the next one will be more about 1Hive and Giveth.

We also had nice meetups with cool members and founders of Metagame, Dao Exchange , Doin Gud and we are open for any integrations with them in future if we come up with mutual ideas.

As usual the NFBeez are buzzing hard and because spring is here we are even more motivated than ever to continue to provide value to our community. The biggest moves we made in March are:

-working on an innovative NFT in collab with 1Hive/NFBee artists

This month they had a lot of development around the new design of Quest as well as fixing some bugs. This is our final step and once it will be completed and all bugs will be fixed, Quests will be officially released as the MVP

We will then try to figure out what is the next scope for further development as well as our post release strategy regarding project management.

PS : We also raised a funding campaign as a Gitcoin grant to gain some visibility in the outside world.

The treasury swarm is under active discussion of utilizing and redeploying ~ 100 HNY that has been deployed in the Hedgey Treasury Pools protocols. That has proven successful, and now the swarm has 12k xDAI in its multi-sig that can be used for general DAO purposes.

The treasury swarm is looking to chat with the broader DAO community on a few topics in the very near future:

Due to technical constraints, we are unable to stream to the original 1Hive YouTube channel. However, we continue to post interviews and highlights from the DAO News show and will expand to other programs in the near future.

In an effort to grow the broadcast, 1HTV started streaming on Twitch and a new YouTube channel simultaneously this month. We continue to host each broadcast in the 1Hive discord, but are planning to migrate over to Twitter Spaces as soon as possible. This will enable us to reach the entirety of CT with each program.

This month, 1HTV added two new biweekly shows (next episodes for both on Tues, 4/12!)

The current 1HTV broadcast schedule is as follows: 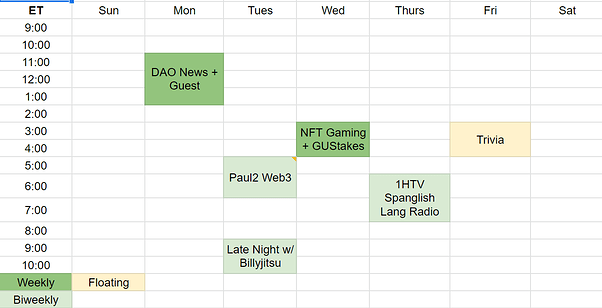 As always, thank you for reading so far. See you for the April Monthly Recap!