Welcome to the first recap of 2022. While the market is reboucing, the bees of 1Hive keep building and working on cool projects. This month has been very busy, especially for a few Swarms (Commons, Agave, NFBeez, Treasury) and, therefore, make sure to read until the end of the article!

Support Swarm has been everywhere, giving an example of what it is to be a member of 1hive. January was not necessarily a very busy month, but our members have always had a constant presence on all our channels, ready to offer help to anyone in need. Our funding lasted one month more than expected, and we are now preparing a new proposal that will enlarge the utility of the Swarm and the reach of our work.

The proposal is set to be up in February.

The Terra swarm was not active in January, since the December monthly recap was out a bit later and we decided to save the funds for the upcoming recaps and valuable articles to translate.

Stay tuned for the upcoming recaps and translations from our team!

Definitely one of the busiest months in Agave’s history!

In January we added 2 new tokens as collateral: $LINK and $GNO. What does this mean for the Agave platform? According to DefiLlama, this meant a spike of 304% in our TVL, which peaked at roughly 8.5M before the market correction.

Both tokens were added after a community vote which received great participation.

We have reintroduced the Gno-Agve incentives through the CPT token. If you are unfamiliar with them, please check this guide and video about it.

This is not everything. We announced a partnership with DeHive and hosted a double Telegram AMA on Friday 21st. Agave is part of DeHive’s xdai cluster.

Our social engagement rose quite consistently, and we surpassed 3000 followers on Twitter.

The end of the month is also very interesting. On January 28th we hosted an AMA with the ShapeShift Community. The communities was asked to vote on adding $FOX to the Agave Platform and in February the token will likely join our Money Market Protocol.

We have more exciting news for the coming weeks and months, and we’re enjoying the growth of Gnosis Chain. Stay tuned through our channels.

Metaverde has been hosting weekly labs, at first going through Cryptozombies and now doing Austin Griffith’s Scaffold-Eth challenges. You don’t have to sign up at Speedrun. If you do, though, you can submit your challenges to be tested, start building a portfolio, and eventually get your ENS wallet courtesy of Austin, join BUIDL Guild, and get streamed Ethereum!

Speaking of streaming, T Wells has generously offered to stream the labs to Twitch. Thank-you to T Wells. For the first week in February we’ll be going through the simple-nft-minter, Challenge 0. It’s super simple, just to get you set up with the tools. No coding: a little cut and paste is all. Unless someone would prefer something else, of course.

Scaffold-Eth was designed so devs could set up a project already connected to a front-end, especially to get hackathon contestants able to work on and demonstrate code quickly. Even people who don’t want to learn Solidity should at least do Challenge 0. Being able to spin up and deploy a web3 site is powerful.

Watch for the time!
It’s not set in stone for Thursdays any more.

Buzz team in January 2022 was focused mostly on creating opportunities such as partnerships, AMA events, building connections with other partners and informing through our social media and reader channels.

We are still noticing growth regarding the followers/subscribers which means the interest is there. We also had buzz calls each week talking about reorganising our activities and creatives and on how we can improve our reach. Several discussions gave us some signals on what we should do next, we felt need to create more article channels which are good for content syndication and we also get to have more outreach.

Our activities on social media channels are moving on constant pace and increasing too ,we regularly communicated about any news on these channels :

https://twitter.com/1HiveOrg
https://twitter.com/Honeyswap
https://medium.com/1hive
https://www.twitch.tv/1htv
We were thrilled to have AMA sessions with Dehive Finance on their discord and on our 1Htv channel on Twitch,we also had fun with Zer8 and Billijitsy talking about NFbeez and communicating regularly about this cool new project. We partake in additional AMA sessions with Hedgey Finance and Shine DAO.

Producing more content with 1HiveTV now, we are hosting new live event each Wednesday on Twitch with D0sh and solarmkd, starting at 8pm utc , focused on NFTs and gaming which we think is nice addition to the Mondays 1Hive Twitch 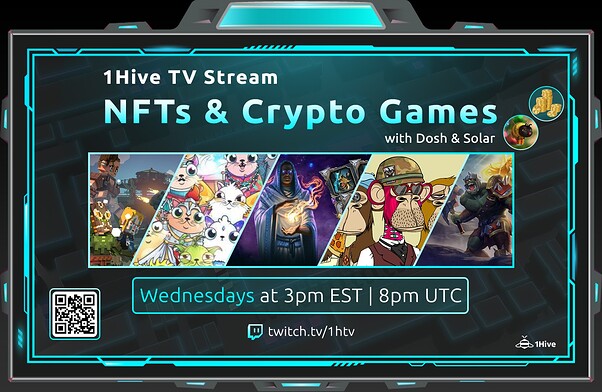 We also have a Buzz Calls on our Discord on Thursdays 8pm UTC, everyone is welcome to join.

The NFBeez are building behind the scenes to create more community interaction and utility. They hit a large milestone with over 1,000 mints. A 1 of 1 Fire Bee was minted in the last week of January with still 2 more 1 of 1 unique bees to be found.

What the NFBeez have given back to the community so far after launching 2 weeks:

o The NFBeez gave back 688 xDai to the 1Hive Treasury as part of their promised budget. As more Beez get minted, more will go back to the treasury

o The NFBeez gave 313 xDai to the 1Hive BuzzDAO Treasury as part of their promised budget.

o In the currently stated contest, ONE lucky NFBee holder will receive 1 HNY token just for holding an NFBee (This includes ALL airdrops holder and contest winners).

Currently, the NFBee NFT token is being used as a governance token via Snapshot through snapshot.org. With a successful pass for making payments in pure xDai there are a few votes coming up.

Adding WalletConnect and other wallet support

A gallery just for the beez

First of all we had new funding this month. So we want to thank the community for their support.

Progress with the MVP UI is close to completion. We’ve mainly been bug fixing and will continue to for a few weeks. Chimdalu has started UX and design investigation and we may update the design if we feel we need to.

The current rinkeby test deployment can be seen here: Quest

The current logo can be seen in the Discord Quests channel:

Discord - A New Way to Chat with Friends & Communities

Discord is the easiest way to communicate over voice, video, and text. Chat, hang out, and stay close with your friends and communities.

All the MVP feature are now functional:

Thank you for reading so far and, as mentioned, make sure to join the conversation on our social channels. See you at early March for February’s Recap!

Thank you Stonky! what a impressive month for Agave. all is goooood!