The Gardens Swarm is rolling out Fluid Proposals, a new Conviction Voting proposal type that allows for community members to request ongoing token streams from the Common Pool through a Superfluid integration. The amount of conviction accrued for a Fluid Proposal determines the amount of tokens that stream to that proposal.

1Hive voted to approve the new feature for its own Garden as a pilot, and depending on feedback from the pilot will work towards a v2 that can be integrated by any of the Gardens communities.

An initial proof of concept demo was completed for the Aragon’s proposed delegate-voting DAO. Rodrigo and Sem are next working with the Aragon Association on a demo that will be capable of receiving funding from the Aragon treasury.

Agave’s Devs are working under the radar in close relationship with Gnosis, with the goal of implementing new features and being the reference money market protocol of the chain.

We are also working on a new funding proposal that could allow part time contributors to work on bounties and more.

Buzz DAO is going to soon formulate a new funding proposal. Our funds got drained after the last month, and we are going to prepare the new proposal with interesting features and new scopes in the coming days. So, get your HNY read to support the Swarm!

We have had multiple calls to figure out tasks and future collaborations (with Colony and Lighthouse, for instance), and experimenting with new ways to pay contributors depending on their tasks and produced work, keeping everyone busy and avoiding wasting precious HNY. If we will be successful in experimenting with new tools to compensate contributors, we would love to export the idea to other swarms, maximizing the proficiency of every working group and creating an easier “way-in” for potential new collaborators.

From a broader perspective, we are thinking to get more active through articles writing; our social presence is always dense, and our talks for other wallet integrations are ongoing, although at the moment there is nothing concrete and worth announcing, especially after the Brave wallet integration.

The NFBeez second project “The Cube” is still in works. Reaching out to communites/DAOs to get get permission to use LOGOs and metadata clearance is currently ongoing. Artwork is currently being finalized as well. The hope is to launch end of October/ Early November. All NFBee holders will be able to claim 1 Cube per NFBee held. The goal of the project is Dapp/Community discovery. The overall goal is for DAO/Communities will be able to use these as promotional tools as well as mementos instead of giving away tokens that can be sold easily. As more art gets finalized, we will be showcasing on Twitter and discord channel.

Celeste had its busiest month of disputes created in history, caused mostly by the integration with Quests which is bringing in new disputes of Quests claims.

The Celeste Precedence Library was updated with case descriptions for the first 7 disputes in Celeste.

Some improvements made by Felipe:

This month, Quests swarm has put more focus on feature and overall enhancement.

The first feature was to allow more communication between quest parties, this has been redesigned to be more open ended, so no more integration with the 1hive forum. Here is the new Quest creation form : 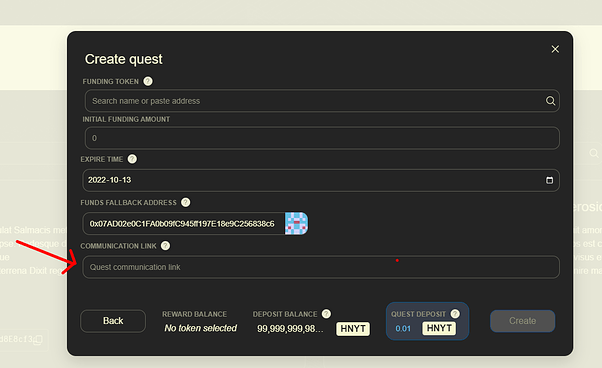 However, if 1hive community want the forum to be integrated it still be an option. (Gardens style). In the other hand, we worked on migrating from Rinkeby tesnet to Goerli, we will then deprecate Rinkeby very soon.

We also worked on developing e2e testing to catch the major problems before there are in prod.

That’s pretty much it for this month, the second feature (Play a quest) is coming next month, it need some ground work on contracts before we do it.

See you next month

Thank you for reading so far and staying update with our DAO. See you in a month for the next updates.
Stonky